By News Staff on February 5, 2012 in Government Agencies/Utilities 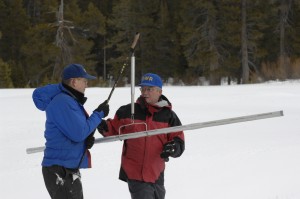 DWR's Frank Gehrke (right) heads up snow surveys for the State said that even though things look white, the snowpack remains thin.

Here’s the story – The State says it’s shaping up to be one of the driest winters on record.  The Department of Water Resources reports that snow levels average out at just 37% of normal for this time of year so far.  Even that low level amounts to a better number than last month’s survey which showed snowpack water content at 19% of normal.

In the Eastern Sierra, the bellwether for snow and water conditions here is the Mammoth Pass Snowpack.  DWP’s website shows the pass now at the same level of the driest snowpack in 1976-77.

State water officials point out that we have one-third of the winter to go, so conditions could improve. Maury Roos, California’s state hydrologist was quoted as saying that it’s time to be concerned.  He says we need a normal rain and snowfall in both February and March, but Roos also pointed to the winter of 1991 when conditions started out as they are this year but turned very snowy in March.