By News Staff on February 12, 2014 in Government Agencies/Utilities

The recent storms did give the Eastern Sierra snowpack a bump, but just a bump. 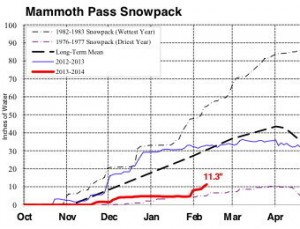 Snowpack water content (in red) inched up over driest year.

On the Department of Water and Power website, the current precipitation charts show Mammoth Pass water content barely above the driest year on record, which is the snowpack of 1976-77. This year’s snowpack looms way below last year and below the long-term average snowpack.

The State Department of Water Resources verifies the grim picture in the mountains. DWR completed the second statewide snow survey at the end of January. Some more snow has fallen since then but the State surveyors said the winter still remains dry. They urged water conservation.

DWR surveyed the snow prior to the most recent storms and found the statewide water content at only 12% of average for this time of year.

When the Inyo Supervisors met last week, they passed their somewhat revised Drought Proclamation. Administrator Kevin Carunchio said officials would revisit the proclamation every two weeks. He said the County would begin to mobilize its drought operation plan for response.

Supervisor Chairman Rick Pucci said everyone has been getting a lot of phone calls about the drought. There are still grave concerns in West Bishop over wells drying up there. Pucci said the County would tell the public if federal funds become available to help.