The last round of storms has pushed the snowpack at Mammoth Pass to just about normal for the season. 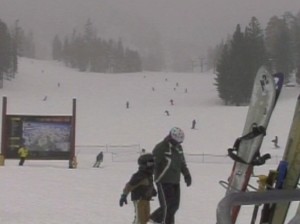 Green shoots already springing up in the valleys, along with a visible blanket of snow on the mountains points toward a good winter for water.

Last summer, Forecaster Dennis Mattinson predicted the seasons snowfall to be 458 inches at Mammoth Mountain, lower than what actually arrived. I under predicted, which is pretty good he says, adding, if I was right on, it would be fishy.

We work to provide daily news to all of the Eastern Sierra, in the tradition of Eastern Sierra News Service and the Sierra Wave. We bring you daily happenings, local politics, crime, government dealings and fun stuff. Please contact us.
View all posts by News Staff →
Attorney “Puzzled” By DA’s Move to Recuse in Harvey Case
Ranchers Eye Bureaucracy with Concern