The reference to Sierra snowpack in Monday’s Tech Group story was misleading. The 115 percent was pulled from a Los Angeles Times article of January 28, noting the numbers from the state Department of Water Resources. There’s a very strong possibility those numbers referred to the water shed on the other side of the mountain. 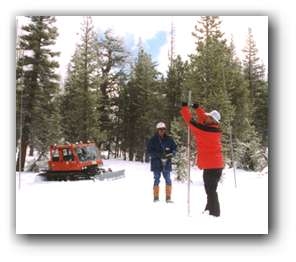 Los Angeles Department of Water and Power numbers, dated February 2, show an encouraging trend but only Mammoth Pass’ snow pillow exceeds 10- percent of normal to date at 123. The range of Eastern Sierra snow pillow sites range from a low of 59 percent at Big Pine Creek, to 82 at South Lake, 83 at Gem Peaks, 89 at Cottonwood Lakes and 95 percent at Rock Creek.

On the valley floor, Big Pine leads the rain race with 89 percent of normal with Independence running a close second at 88, followed by South Haiwee at 85, Long Valley, 70, Cain Ranch, 66 and Bishop trailing the pack at 48 percent.

The water content in the Mammoth Pass snowpack is a healthy 33.8-inches, just above the 1997-98 El Nino year snowpack but below the historically wettest rainy season 1982-83 that peaked at 90 inches in mid-May. The average hits a high in the low- to mid-40 inch range,