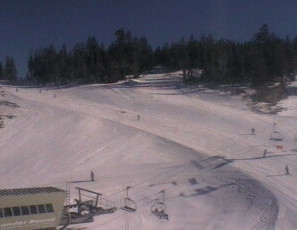 The result of low snow and ultra-warm temperatures in Southern California? Lots of no-shows in Mammoth Lakes.

According to Mammoth Lakes Tourism’s town occupancy reports, lodging reservations are down over last year. The Department notes that these figures are put together to help the business community with staffing levels and product ordering. Actual occupancy percentages are reported from lodging to the Town Finance Department after the fact.

Projections for New Year’s weekend are Friday, January 3rd through Saturday, January 4th at 55% occupancy. Last year it was 75%. In the foreseeable future, dry and warm conditions are expected to continue.

We work to provide daily news to all of the Eastern Sierra, in the tradition of Eastern Sierra News Service and the Sierra Wave. We bring you daily happenings, local politics, crime, government dealings and fun stuff. Please contact us.
View all posts by News Staff →
New laws: from bicycles to limousines
Council starts solid waste analysis process

maybe if you send some money to mother nature,things will be all better,wake up.no snow ,no skiiers,no money,its real simple and will never change,stop with the greed and start doing rain dances

Tough to make money off skiing if the weather refuses to cooperate. What do you expect people to do? It seems some here are only happy when they have something they can claim they don’t like to criticize.

I don’t disagree with you, but the fact is everyone was sold on the TBID as a way to market and generate more revenue for the town. Now this report says occupancy is down due to the lack of snow. Well, why have the TBID if its snowfall that makes… Read more »

I wasn’t sold on the TBID — not that what I think matters to the town steakholders. Mammoth Lakes has deteriorated over the last 15 years. It hasn’t made itself a better place to live. And all the vaporous plans to redevelop Main St. as a cure are just giveaways… Read more »

Watch out MMSA employees. Still 5 days left in the week to be labled “Black”.
Will Rusty take the full wrap again or will there be a new trigger man?

Rusty is most likely out as top man, you cannot reward failure. The only thing I have observed in MMSA is to be like Aspen and turning its back on the core skier market (middle class)that made Mammoth. The result is an ever increase in ticket prices, super expensive food… Read more »

The Mammoth TBID = Taxation with out Representation…

We can call John and Rusty King George now

Wait, so when we don’t have snow, business percentages drop? Humm, what does the TBID Tax do again?

Isn’t Mammoth Tourism supposed to take care of low occupancy with all those millions of dollars they get? A better use for that money would be to buy visitors free gas.