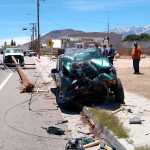 Driver falls asleep and crashes into LADWP power utility pole in Big Pine, disrupting power to much of the town.

Between 10:30 a.m. and 11 a.m. this morning, on Monday, June 8, the power went out for quite a few Big Pine residents as David Froehle of Desert Hot Springs, CA, was driving a 2000 Ford Ranger pickup northbound on US-395 near Locust Street in Big Pine, CA.  that plowed into a power utility pole directly across the street from the Copper Top BBQ on the 300 block of Main Street.

According to California Highway Patrol officers on the scene, the solo driver told them that he had fallen asleep.

The truck, according to a witness, was northbound on the 395 Hwy when it suddenly veered across the roadway, hitting the curb and then plowed into the power utility pole, taking it out and badly damaging the truck. Witnesses say the driver, Froehle, jumped out of the truck and away from the falling pole. He was not injured. 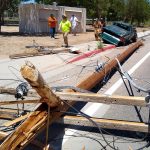 Power out in many homes and businesses for several hours.

Power was rerouted around the site to restore electricity to homes. Suddenlink cable also seemed to have been affected, knocking out service as far away as Independence.

Power was restored late in the afternoon after 5:00 p.m.

I was there today, this guy almost killed me. He was definitely going faster than 30 mph. He came from northbound lanes and veered into southbound traffic rite in front of he. It was crazy. I’m glad he survived!

Thank you for sharing, Nicole. We’re happy that both you and he are safe.

Yep…..looks like damage from a 30 MPH in town speed limit crash to me…