Most Eastern Sierra drivers see an occasional dead owl or raccoon on the highway shoulder or have a close call with a group of deer, a speedy roadrunner or coyote as they cross the road ahead of them. 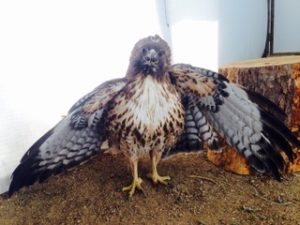 Red-tailed Hawk collided with vehicle near Laws. This lucky bird is recovering rapidly and should be ready for release soon/Photos courtesy of WCES

Why don’t the animals just stay away from the roads? Roads and highways cut through wildlife habitats where birds and mammals search for food, water, and shelter  survival basics for all animals. Food in the form of seeds, plants, insects, small rodents and roadkill are found on roadsides. Creeks, canals and ditches are spanned by roads and bridges. Roads are frequently bordered by trees, brush, and rock piles that offer perches, cover and, in some cases, food.

In some parts of our country, elongated bridges, overpasses and underpasses, combined with fencing to guide animals into these safe paths, help reduce the number of animals killed. Unfortunately, California lags way behind in installing such features. 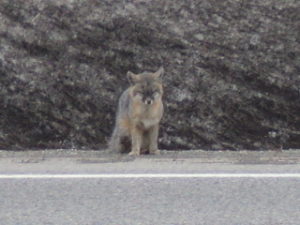 A young Gray Fox, stunned after being struck by a car, on the shoulder of Sherwin Grade. He was released after his fractured leg healed

So, what can you do to help? If you hold in your awareness that wild animals share the roads with us, you will be more likely to see the bird or mammal in or near the road and be able to slow down or stop.

Some lifesaving tips: Follow speed limits. Taking it slow also makes it safer for the animals and other drivers, cyclists, and pedestrians.

Watch for wildlife in and near the road at dawn, early morning, dusk and the first few hours after dark. Keep in mind that where there is one animal there are probably others. Deer travel mostly in groups; young animals follow after their moms.

Be especially cautious on two-lane roads bordered by woods or fields, or where streams cross under roads. Most animal/vehicle collisions occur on these roads. Try slowing down to at least 45 mph. 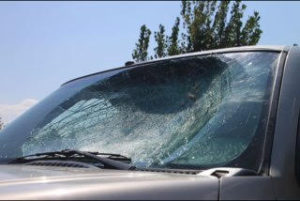 This truck collided with a Golden Eagle on a dirt road near Crowley Lake. The eagle died from her injuries

Scan the road as you drive, watching the edges for wildlife about to cross. You will also be more aware of children at play, pets such as dogs and cats, and vehicles backing out of driveways.

Use your high beams whenever possible. Lower your dashboards lights slightly. You’ll be more likely to see the reflection of your headlights in the eyes of animals in time to brake.

We who live in the beautiful Eastern Sierra are fortunate to share our landscape with an abundance of wild neighbors. Our hearts soar with the golden eagle just lifting off a roadside boulder. We smile seeing the four fuzzy raccoons scurrying after their mom or a group of does and fawns as they fade into the shelter of nearby woods. We thrill at a glimpse of a black bear or bobcat.

We can enjoy these moments and give our wild neighbors safe passage by simply opening our eyes and slowing down. Near dusk yesterday, on Hwy. (6) near Laws, a Red-tailed Hawk survived a skirmish with a passing vehicle. Just maybe, the driver was obeying the speed limit, keeping a lookout for wildlife, and a beautiful, mature hawk got a brake. She’ll be going home in a few days.

Yes, slowing down is safer for everyone – wildlife and humans!

Something I do is when I see a dead animal on the road is remove it,whether it be a cat,raccoon,dog,skunk,rabbit,etc…mainly out of respect to the animal,so stupid people don’t keep running over and pancaking it.Also,the dead animal attracts other animals,birds,coyotes to feed on the carcass,which leads to stupid people speeding… Read more »

Good lord, the damage to that windshield occured on a dirt road? How bloody fast was that guy going? Most drivers don’t give a hoot about wildlife or anything else on the road whether its a cyclist, a pedestrian or a wild animal and whether its on a dirt road… Read more »

Amen to that. Leave that hurried BS down south.

I completely agree people are driving way to fast. I notice the speeding in Bishop just before 8 a.m. on weekdays. It’s amazing locals can’t leave early enough to drive a 2 miles to work without speeding. You’re in Bishop not L.A. slow the hec down. The fact that you’re… Read more »