The Carson & Colorado Rail Way invites everyone to enjoy a day with the Slim Princess Locomotive #18 on Friday, Oct. 5 at the Eastern California Museum in Independence. 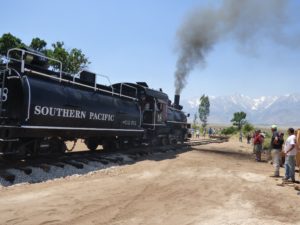 The all-volunteer crew from CCRW will be firing up the historic, narrow gauge steam engine and offering rides in the cab of the restored locomotive, starting at 9 a.m. The engine will be steaming out of the Larry Peckham Engine house for short runs on the track installed on the museum grounds.

At 4 p.m., world-famous “Independence Trash Can Trip-Tip” will be the main entrée for the dinner served in the museum picnic area.

The day will offer a great opportunity to see the iconic steam engine in action. The #18 was built in 1911 by the Baldwin Locomotive Works in Philadelphia, Pennsylvania. It eventually found its way to the Southern Pacific narrow gauge line running between Laws and Keeler.

That rail line was constructed by the Carson & Colorado Railway in the 1880s, and originally reached north into Nevada. Southern Pacific bought the line in 1900. 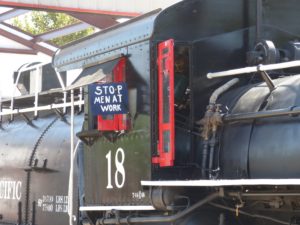 C&C Cab Paint: The restoration job on the Slim Princess included detailing and restoring all aspects of the steam locomotive, which ran from Laws to Keeler until being retired in 1954. Eastern California Museum photo.

The sturdy locomotive was joined by her “Slim Princess Sister,” Engine #9 on the route.

There is some confusion about which engine is the “real” Slim Princess. Both locomotives earned the “Slim Princess” name because they ran on narrow gauge tracks, thus were “slim” engines, as opposed to their larger, more beefy brethren plying the standard gauge line from Owenyo to Southern California.

In 1954, the two oil-fired, steam locomotives were retired in favor of a more efficient, but far less photogenic and interesting looking diesel locomotive.

Number 9 was taken to the Laws Museum, outside of Bishop, where she resides to this day as a “static” display. Number 18 was relocated to Dehy Park in Independence, where she was a landmark for locals and travelers on US 395 for decades.

About 20 years ago, Independence resident Dave Mull and a small group of train enthusiasts began the process of restoring #18 to running order. Their research revealed the locomotive had been given a complete overhaul in the Southern Pacific maintenance shop just before it was retired.

Encouraged by the knowledge that the main components of the engine were in good shape, the group started work on the restoration process. As the effort progressed, experienced, licensed steam locomotive mechanics and engineers working on operational trains across California, Nevada and Colorado volunteered their time and expertise to the effort.

In 2016, the Slim Princess was successfully steamed up for the first time in 64 years. It ran like a charm. In July of 2017, the engine was moved to the grounds of the Eastern California Museum and housed in the new, Larry Peckhan Engine House. The engine house provides ample space to work on and maintain the engine, store all the tools unique to the maintenance operation, and also enough room to park a second rail car for restoration work. 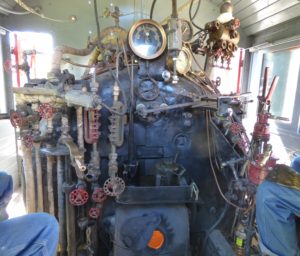 C&C Cab Detail: A view of the intricate and complex controls in the engineer’s cab that keep #18 steamed up and running. Eastern California Museum photo.

The engine runs on a fairly short stretch of narrow gauge track at the museum. But just seeing the huge piece of machinery steamed up and rolling is quite a sight. The engine is a complex bit of machinery, and a peek in the cab reveals a staggering array of dials, nobs and gauges, plus an open fire box, that keep the engine running safely.

On Friday, cab rides will begin at 9 a.m., for a $20 donation. The engine will run throughout the day.

At 4 p.m., the Tri-Tip Dinner will begin. Served at the museum picnic grounds, the cost is $15 a person. A vegetarian meal will also be available.

All proceeds from the train rides and dinner will go to non-profit Carson & Colorado Rail Way group, to help fund the ongoing maintenance and operation of the #18 locomotive. Donations are also welcome and are tax-deductible. 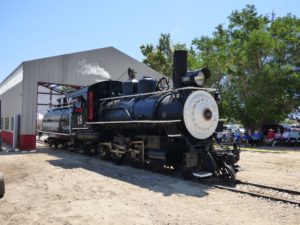 For more information about the Oct. 5 event, call the Eastern California Museum at 760-878-0258. For more about the Carson & Colorado Railway group, see carsoncolorado.com.