The Slim Princess locomotive was on the road, and the sight of a full-size steam locomotive rolling down US 395 drew quite a crowd. 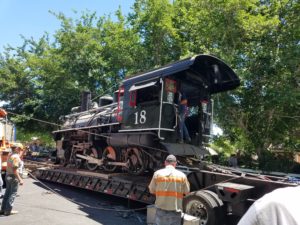 The fully refurbished narrow-gauge locomotive was loaded on a semi-truck trailer on June 9 and hauled from its longtime perch in Dehy Park in Independence to its new home in the recently constructed Larry Peckham Engine House at the Eastern California Museum. 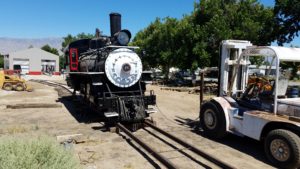 o roll the 22-ton locomotive to the trailer. The large semi-tow truck from Miller Towing in Lone Pine winched the engine onto the trailer. Once secured, the rig rolled down US 395 and then up Onion Valley Road and deposited the Slim Princess at its new engine house. 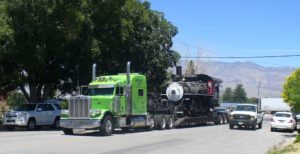 In a way, the very public move of Engine #18 represented history repeating itself. In 1955, Southern Pacific donated the engine to Inyo County. A group of volunteers built the short run of track in Dehy Park. The locomotive arrived on the back of a truck. As an appreciative crowd watched, the engine was placed on the track. It remained a well-known landmark and anchor of Dehy Park for the next 62 years. 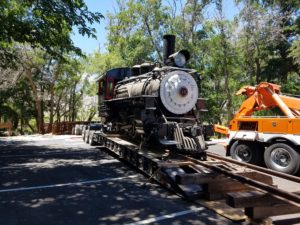 Before it was retired to the park, the Slim Princess had quite a work history. The narrow-gauge engine, which was built in 1911, came to the Owens Valley in 1928 and was operated by Southern Pacific, which had taken over the original Carson & Colorado route from Keeler to Nevada. In later years, the route was shortened to just Keeler to Laws. The steam locomotive was replaced by a diesel electric engine in 1955.

The move to the museum grounds represents one of the final steps in the successful effort to restore the engine to fully operating condition. The non-profit Carson and Colorado group has spent the last five years working to get the locomotive running. After firing it up late last year, the group obtained all the relevant state and federal permits to operate the engine. 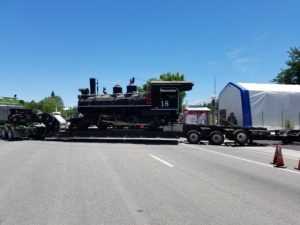 Volunteers, including numerous professional steam engine and locomotive mechanics and engineers, put in thousands of hours of work on the engine. Financial help came from some grants and large donations, but mostly came from selling t-shirts and hats and hundreds of small donations and fundraisers. Over the years, more than $100,000 was raised to fuel the restoration effort. 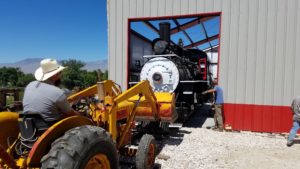 The locomotive will get an official dedication on Monday July 3, during the Slim Princess Engine #18 Silver Spike Celebration. The locomotive will steamed up around noon, and the final “spike” will be ceremoniously driven on the 300-foot length of track on the museum grounds. Visitors will be able to take an up close look at the locomotive and talk to the engineers and mechanics who rebuilt her. 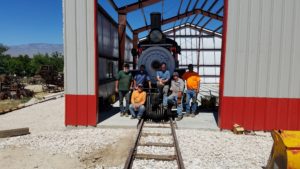 The Idle Hands Bluegrass Band will perform starting at about 4 p.m., and there will be a fundraising tri-tip dinner on the museum grounds, at 155 N. Grant Street in Independence. Please RSVP for the dinner by calling 760-878-0258, or going online at https://tinyurl.com/ku9nkm3.

The Carson & Colorado Railway (CCR) is an all-volunteer 501(c)3 non-profit group dedicated to the restoration, and eventual operation of Southern Pacific narrow gauge locomotive #18, as a living reminder of the proud history of Independence and Southern Inyo County. For more information, and the group’s latest newsletter, check www.carsoncolordo.com 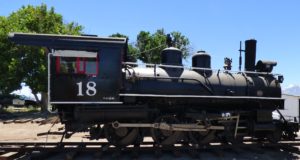 I was saddened to read Donald Salac’s somewhat vitriolic response to Rick O’Brien’s comment. I am from the UK where volunteers have donated their time to not only restoring hundreds of locomotives and rolling stock to working order but their track to run on as well, Indeed they have even… Read more »

Mr O’Brien, I doubt if anyone voted negatively about the beautiful restoration of a piece local history. What amazes me is so many people voted for your crass, insensitive and asinine comment that it was all a waste because YOU can’t go for ride. A 65 Mustang has millions of… Read more »

Why would anyone vote negatively on something so positive ? I’m sure it was either HERE, or the Inyo Register that I read that the train would see service again . Haters gonna hate ,I guess.

I thought the end result of this restoration was that the train would be returned to service as a tourist deal and put on a loop-track & would carry passengers, just like the one at Virginia City, Nevada . Seems like a huge waste to get the steam engine back… Read more »