Trains played a major role in both the development of the West and then again in the Western movies during the 50s. But, even for those of us who were religious Western movie lovers, the size and scope of the Slim Princess,  currently living in her own home at the Eastern California Museum, is impressive. She’s huge and she’s back in the news with the Inyo Board of Supervisors update on plans to extend the track at the Independence museum site.

The story of how the Princess, aka the No. 18, ended up in Independence is almost the stuff of movies itself. Randy Babcock played a role in bringing the Princess back to life and chronicled the Slim Princess’ story in a book, “SP Narrow Gauge 18 Steams Anew.” Babcock’s book and his virtual appearance at the Supervisors meeting were the source of this story. 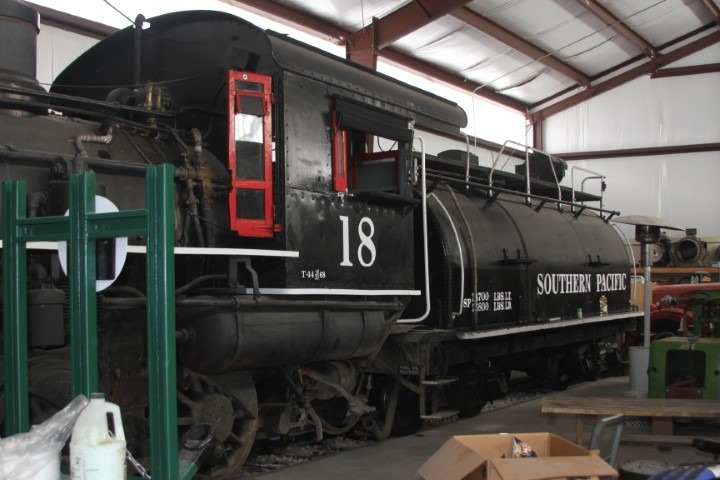 Southern Pacific No. 18, also known as the “Slim Princess”, is an oil-fired 4-6-0 “Ten Wheeler” type narrow-gauge steam locomotive built by the Baldwin Locomotive Works in 1911. (Wikipedia)- (Photo by Deb Murphy)

Built in 1911 by the Baldwin Locomotive Works, the Slim Princess worked the Nevada California Oregon line for 15 years, eventually sold to the Southern Pacific narrow gauge line. Mining, timber and farming in east California, Nevada and points west kept railroads companies going since the 1880s. The Carson and Colorado Railroad Company was incorporated in 1880 running on the narrow gauge lines.

The arrival of big diesel-fueled engines heralded the end of the narrow gauge lines and sidetracked the Princess in 1953 after making its last run from points north to Keeler. That would have doomed the Princess to junk metal had it not been for Anna Kelly and others in the Owens Valley with a long history with and a love for trains.

Kelly requested an engine for Inyo County. Her first clue her request was about to be granted was the news Southern Pacific crews were pulling old rails. The 18 was hauled up to Bakersfield to get cleaned up then brought back to Lone Pine. Kelley hit up Sid Paratt with the Los Angeles Department of Water and Power to secure a designated spot at Dehy Park, then wrangled an assortment of locals to get the Princess to Dehy. There she sat.

The next player in the Slim Princess’ resurrection was Myron Alexander. He’d been cruising past the engine in the park on trips from Lone Pine to Bishop, got discouraged by the volume of bird droppings on her and checked with museum staff. He was handed “a box of dirty rags” and pretty much told to have at it. Alexander and a growing crew of railroad buffs went to work in what Babcock describes as an “on-again, off-again schedule.”

Additional railroad track will be added. (Photo by Deb Murphy)

In January 2001, enough work had been completed to light the firebox, get the steam pressure up to 50 psi and blow the whistle to salute the recently deceased Alexander.

Seven years later, the crew realized if the Slim Princess were ever to reclaim her heritage, they needed not just a plan, but the support of Inyo County. The planners referred to the Federal Railroad Administration to define the standards to which the Princess should be restored. Dave Mull and Babcock made the presentation and the Supervisors gave the crew six years to get the job done.

[Note from the article’s author: Sierra Wave isn’t normally in the business of plugging people’s books or projects, but to be painfully honest, I’m not up to the task of explaining the mechanical machinations it took to get the Slim Princess in running shape. Mechanics is not my long suit. As a writer, the Princess is an enchantress, not because of her mechanics but because of the community that brought her back to life.–Deb Murphy]

Are they gonna put her on a loop so we can all take a short ride or what ?