If it’s December, it must be time for the annual report on the Lower Owens River Project. Representatives from the Los Angeles Department of Water and Power, the Inyo County Water Department and interested parties gathered at the department’s office early Tuesday morning for the report recap and recommendations from consultants Dr. William Platt and Mark Hill, the later by telephone. 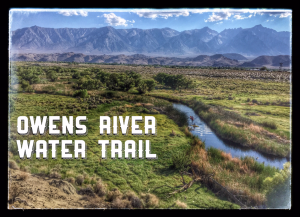 The consultants seem to have accepted the Lower Owens River is what it is and project goals and management practices need to be re-evaluated “based on what we have,” said Hill. Hill and Platt as well as many in the sparse audience viewed the County’s Owens River Water Trail project as an opportunity to improve flows and provide recreational opportunities, both goals of the project.

The last few years’ reports and recommendations have been déjà vu-ish. Progress towards the goals of the project has been slower than hoped. And the Lower Owens resembles a canal more than a natural river. Over the last few years, Platt and Hill have pushed for increases in the seasonal flows to more closely imitate nature and take out the tules clogging the channel and wreaking havoc on what were once grasslands.

The parameters of the project in its tenth year are spelled out in a Memorandum of Understanding among often conflicting parties. Some of the recommendations would have required changes to those parameters, agreed to by all parties. That didn’t happen.

This years’ reports from LADWP’s Lori Dermody and Eric Tillemans on avian surveys and hydrology were encouraging. Inyo’s Mitigation Manager Larry Freilich reported the Rapid Assessment Survey indicated a slight increase in new tree growth and a slight decline in invasive salt cedar and pepper weed. One downside: an increase of new roads into the river’s flood plain. 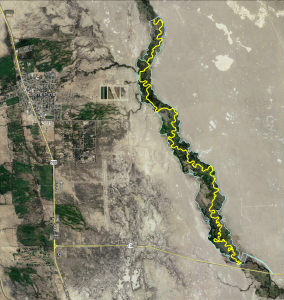 The consultants focused on maintaining a healthy fishery and, accepting that a natural river system is not going to happen, to concentrate on “active intervention.”

Platt and Hill’s first example of that intervention was the Owens River Water Trail for which the County has been awarded a $500,000 California River Parkway Grant from the Department of Natural Resources. The project would open up 6.3-miles of the river for kayaks and canoes from the Narrow Gauge Road north of Lone Pine to State Route 136 with handicapped-accessible input and takeout. Before the funds can begin to flow, the County has to negotiate a site agreement with LADWP.

Dermody explained the department wanted a California Environmental Quality Act study to evaluate all the impacts before it entered into an agreement. The County can’t afford the approximately $80,000 to do the environmental study without the grant funding which won’t come without a site agreement.

Mike Prather reminded the panel in addition to recreation, described as the weak step sister of the LORP, the Water Trail would improve both flow and water quality.

Additional department concerns are a commitment to 20 years of maintenance and the spoilage—the gunk excavated from a short stretch of the 6.3-mile trail that would closely resemble what a natural river would leave on the river’s edge during high flow years.

According to Freilich, the County is looking at the implications of the 20-year maintenance commitment. “They’re doing their due diligence,” he said.

The grant funding will be available until May 2021, but Freilich said, the “State has to see some progress.” His estimation of the actual design and construction work is two years.

The 2016 LORP Annual Report is available at www.ladwp.com/LORP. Comments are due to either Jim Yannotta at LADWP or Bob Harrington, County Water Department by January 5.

Am I understanding correctly that DWP is holding up the much needed Water Trail grant??? If they wanted they could do the CEQA environmental study in house for a lot less than $80k. Very doubtful that there would be any significant impacts and it could probably be a low level… Read more »

Karen I also wonder why it is so difficult to get a commitment (yes or no) from DWP for projects that Inyo Co. and the public want in any sort of timely manner.