Mammoth’s Village Ski Back Trail is ready and waiting for snow. A ribbon cutting ceremony was held on the morning of August 19 to commemorate the trail that has been approximately 30 years in the making. 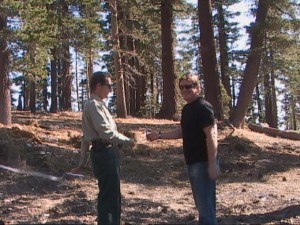 Originally proposed in the late 1970s, design of the trail did not begin until 1994. Over the years much public outcry and comment led to the final design that was approved in January of this year.

“All of those comments made the design better,” explained Jon Regelbrugge, District Ranger for the Mammoth and Mono Lake Ranger District in the Inyo National Forest.

For example, because of reworking the design many different times over the years, the final tree felling amount was less than half of what it would have been originally. Instead of cutting down 500 trees, Mammoth Mountain Ski Area felled less than 200 recently.

While there was an appeal to the final plans, it was ultimately denied by the Forest Service and the appellant did not pursue the appeal in court, according to Regelbrugge.

The public is still skeptical over whether or not there will be enough snow on the trail during the winter to make it useable, but CEO of Mammoth Mountain Rusty Gregory did not think it would be a problem. He felt that grooming the trail would keep it in good shape and could only point to one, extremely southerly exposed point along the trail where snow coverage might be a problem.

“This trail is really designed to be used during the peak season, which is from Christmas until Easter,” Gregory said. “The trail is well shaded for the most part and with the proper grooming the snow should hold up as well as it does on the rest of the mountain.”

The project is expected to be phased and eventually snowmaking equipment will be installed along the trail, most likely in 2011. According to Regelbrugge, it was the Forest Service that really pushed Mammoth Mountain to include the equipment in the proposal.

“At some point someone will want to put snowmaking equipment in there so we might as well already have it approved,” he said.

The Mountain has also taken on the responsibility of installing the connector bridge from the bottom of the trail to the Village. The bridge, as well as a retaining wall along the lower portion of the trail, is expected to be installed in the summer of 2010.

The project, which has a $1.5 million budget, not including the bridge, has already cost the ski area approximately $600,000. Between $400,000 to $500,000 went toward the design plans and the environmental process. The remainder has gone toward the on-the-ground work that has been done so far.

This year the trail is expected to open by Christmas, weather permitting. It will be accessible near the bottom of Roller Coaster Express and the top of Chair 7. The trail will be 7,800 linear feet, 22 feet wide on average, and will be able to handle 900-1,200 skiers and snowboarders per hour.

We work to provide daily news to all of the Eastern Sierra, in the tradition of Eastern Sierra News Service and the Sierra Wave. We bring you daily happenings, local politics, crime, government dealings and fun stuff. Please contact us.
View all posts by News Staff →
Mixed News in Latest Unemployment Figures for the Eastern Sierra
DFG Spells Out Bear Response System