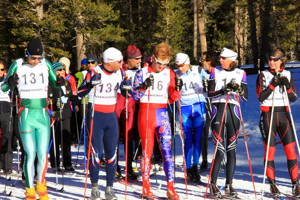 The Tannenbaum Classic Nordic Ski Race kicked off the cross country ski season on December 15h at Tamarack Ski Center.  A crowd of nearly 80 racers, ranging from youngsters who were on cross country skis for the first time, to college athletes, to a two-time Olympian attended the race in the beautiful Mammoth Lakes basin.    Adults raced a 10km race, high school athletes a 5km and juniors raced in either a 2km or 1km race.

A large contingent of junior alpine racers came to test their skills in “uphill” skiing.  The crowd witnessed a monumental result for daughter, Laurel Fiddler, a freshman ski team member at Bates College in Maine, as she beat her mother, Olympian Nancy Fiddler, for the first time.  Middle School Coach, Bryce Tiernan, showed his team members his racing ability by taking first place in the men’s race.

The race was a fund raiser for Eastern Sierra Nordic Ski Association whose mission is to promote cross country skiing and biathlon in the Eastern Sierra by encouraging the development of responsible and self-motivated skiers by providing the support required to assist each athlete to ski and race to the best of their abilities.  To find out more about upcoming events and how you can support cross country skiing, visit esnsa.org. Full results can be found at: http://farwestnordic.org/raceresults/results20132014/tl_tannenbaum13.html

We work to provide daily news to all of the Eastern Sierra, in the tradition of Eastern Sierra News Service and the Sierra Wave. We bring you daily happenings, local politics, crime, government dealings and fun stuff. Please contact us.
View all posts by News Staff →
Mammoth Town Council: Whistler, Town Attorney, solid waste issues
Letter to the Editor: Plea to LA’s Mayor