The Southern Inyo Healthcare District was left without an administration or a board of directors following the decision to bring in the state’s public health department at its final meeting on December 17. But, at least three new potential board members have stepped up and are on the Inyo County Board of Supervisors’ special meeting agenda Tuesday. 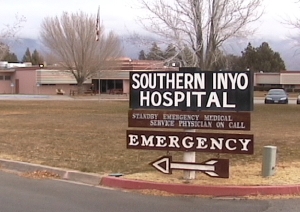 Once appointed, Richard Fedchenko, a retired businessman, Jaque Hickman, owner of Boulder Creek and Mark Lacey, an area rancher, will constitute a decision-making quorum for the board. According to the agenda, the Board will consider nominations from the floor.

Chief Executive Officer Lee Barron resigned December 10 in the wake of the hospital’s dire financial issues. Prior to the board’s resignation, the decision was made to contact the California Department of Public Health with the hope that some medical services could be salvaged.

The special Board of Supervisors meeting starts at 10 a.m. Tuesday at the Board chambers in Independence.

The temporary manager will ensure the health and welfare of Southern Inyo’s residents until they are relocated to other facilities.

“The California Department of Public Health’s top priority is to protect patient safety,” said Dr. Smith. “Our staff was onsite as soon as possible to ensure the residents’ needs were being met and that a transfer plan was in place.”

CDPH staff is monitoring the facility’s daily situation including finances, food, medical and nursing supplies, and staffing levels. There are currently 17 nursing patients residing at the facility.
www.cdph.ca.g

In order to prepare for this potentiality, the Board of Supervisors is now accepting letters of interest for appointment to three of the vacant positions on the District Board, to serve terms as defined by California Government Code Section 1780(h)(3).

The Board will accept the letters of interest on an on-going basis because of uncertainty about if, or when appointments may be necessary

Since it may be necessary for the Board of Supervisors to make the appointments sooner rather than later, the Board encourages any District resident interested in serving on the on the Southern Inyo Health Care District Board to get their letters of interest to the Board as soon as possible.

In order to qualify for an appointment you must be a voting resident of the District. Letters of interest may be mailed to Inyo County Board of Supervisors, P. O. Drawer N, Independence, CA 93516; delivered to the Clerk of the Board of Supervisors Office at 224 N. Edwards (Administrative Center, building just north of the Courthouse), Independence; or emailed to [email protected]