With the special election on Southern Inyo Healthcare District’s Measure J days away, the Board of Directors hosted a final community workshop in Independence last Thursday. 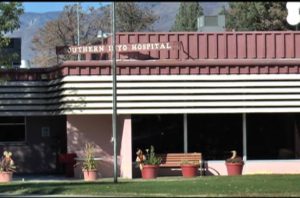 The measure proposes a $215 parcel tax over the next 15 years primarily to pay off creditors from the district’s bankruptcy. The total: $2 million in allowed claims and another $5 million in challenged claims. The district filed its bankruptcy plan in January. The judge, who recommended the parcel tax as the best remedy, opted to wait until after the election April 10 to rule on that plan.

This forum reflected the split within the district, or at least within those who attended the forums. Some think levying additional taxes on residents may not be enough to save it. The other side wants to see SIH succeed under new management and getting out from under existing debt may be the key.

Board Vice President Mark Lacey opened the meeting with a run-down on Measure J and the current status of the hospital. One of his more compelling arguments: after prior bankruptcies, the hospital went back to the same model. “We’re not doing that this time,” he told the audience.

Chief Executive Officer Brian Cotter went through some of the things the hospital is doing this time, including efficiencies in billing that have increased the ratio of reimbursements, new programs and protocols to ensure quality care and partnerships with Northern Inyo Hospital that will provide services of specialists at the Lone Pine facility. “If we clear the debt,” he said. “SIH will have more flexibility and be able to provide alternative healthcare models.”

Residents were upset by what they called “strong arm” tactics in an advertisement in last Thursday’s local paper. The image conjured up by the ad, not placed by the district, was of creditors demanding payment from local residents if Measure J failed.

The district’s attorneys, Scott Neve and Ashley McDow explained the process if the judge dismissed the bankruptcy plan which has cut the approved claims in half. Creditors would come after the hospital for full payment, filing lawsuits or repossessing equipment and other hospital assets. At the point where the Emergency Room was dismantled, the Skilled Nursing Facility and perhaps the Rural Health Clinic, both requiring an attending physician and functioning ER, would have to close.

If the district defaults, the courts could grant whatever tax dollars continue to be collected to the creditors. But, in any case, nobody will be knocking on Southern Inyo residents’ doors demanding payment.

We work to provide daily news to all of the Eastern Sierra, in the tradition of Eastern Sierra News Service and the Sierra Wave. We bring you daily happenings, local politics, crime, government dealings and fun stuff. Please contact us.
View all posts by News Staff →
Inyo County seeking proposals for website redesign project
State of the Inyo National Forest