Within four days of taking their seats on the Southern Inyo Healthcare District board of directors, Richard Fedchenko, Mark Lacey and Jaque Hickman made the decision to contract with Healthcare Conglomerate Associates to bring the Lone Pine hospital back to life. 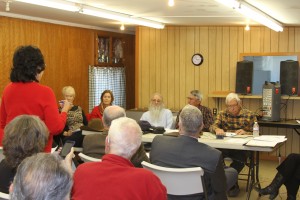 The trio negotiated the contract with HCCA head Dr. Benny Benzeevi at a day-long public meeting in the middle of the holidays. Three months later, the hospital was officially re-opened and staffed.

So far, so good, but it would be disingenuous to assume breathes weren’t being held and fingers not crossed.

Then, late last week, news of a conflict on the other side of the mountain, in Tulare where HCCA has been managing the Tulare Regional Medical Center, surfaced.

According to the county’s Grand Jury Preliminary Report, the facility’s expansion, financed through an $85 million bond in 2005, is still not finished and the district’s board has been anything but transparent about how the money’s been spent despite requests from the district’s Bond Oversight Committee.

HCCA, Benzeevi and Assemblyman Devon Mathis were dragged into the bad publicity fray as were the details of HCCA’s management contract with the Tulare facility, including an option for HCCA to purchase the TRMC.

Was this the other shoe Southern Inyo residents had hoped wouldn’t drop?
“I am confident this has no impact on Southern Inyo Hospital,” said SIHD Board President Fedchenko. “We don’t have to worry.”

During a phone conversation, Fedchenko said he had talked with his board as well as Benzeevi and Chief Restructuring Officer Allan Germany. “This does not impact us or our relationship with HCCA. Our contract (with HCCA) is different that the Tulare contract. As a matter of fact, it’s very different than the original contract (HCCA first presented). At the end of the day, it’s pretty simple. A monthly fee covers HCCA and there are no options to buy.”

While the issues raised by the Grand Jury date back to 2007, HCCA did not enter into the contract with Tulare until mid-2014. HCCA released a statement in response to the Grand Jury’s preliminary report indicating the district board “will conduct a thorough investigation and prepare a formal response to the report.”

Mathis and SIH were mentioned in reports by Valley Voice and the CV Observer. According to the reports, Mathis was asked to request an audit through the Joint Legislative Audit Committee. Mathis declined, according to the reports, citing a “favor” he owed Benzeevi. The favor was Southern Inyo Hospital. Mathis’ office denied the allegations.

Interestingly, e-mails flew from Tulare to the Owens Valley to make sure locals knew what was going on. The Sierra Wave’s e-mail came from the Tulare County Democratic Party. Mathis isn’t a Democrat. Another, sent to a Lone Pine resident, came from a former member of the California Assembly who is backing Mathis’ opponent in the primary.

The SIH board meets this Thursday at 5 p.m. at Statham Hall.

I strongly urge all of you there over the mountains from us who are concerned about SIH to research what HCCA is doing/has done at TRMC. Visit http://www.ourvalleyvoice.com to see what we’ve reported. It will be like looking into the future.

Joseph, I have been following TRMC, which is why I have risked my job here at SIH and speaking up. The board of directors here seem to be the perfect mark, for HCCA to take advantage of. HCCA is filtering/loaning money to finance SIH, it certainly makes no basic business… Read more »

Susan–
Keep your eye on Devon Mathis. He refused to ask for an audit of TRMC because he said he owed a favor to Benzeevi regarding SIH.

The truth needs to be told! SIH past and present Board of Directors have failed the community and former CEO: a collection of self proclaimed community leaders who meet once a month to offer their wisdom. These Board members are part-timers with neither the knowledge nor the incentive to learn… Read more »

On going graft in Inyo County. It is an established pattern.

I’m happy to see that Sierra Wave has taken an interest in SIH, no other local media has. Seems the community tax dollars will pay back the loan to HCCA, leaving the balance to keep our doors open for a few more weeks. This will not be easy considering the… Read more »

Perhaps, Matt Kingsley could shed some light on Devon Mathis. Kingsley was instrumental in bringing Mathis on board, who introduced HCCA to current SIH board.

Susan–
The Valley Voice has printed several articles on Devon Mathis, and I invite you to peruse our website. Further, you can email me if you have unanswered questions.

I am an employee of Southern Inyo Hospital, I will not give my name for fear of loosing my job. I wonder if Board President, Mr. Fedchenko, could explain the fact that HCCA has “loaned” SIH a substantial amount of money? Apparently, the hospital will pay back the loan. However,… Read more »

My name is Joseph Oldenbourg, and I’m the editor/publisher of the Valley Voice. Thus far–and so far as I know–Devon Mathis has not refuted these allegations. His chief of staff, Sean Doherty, tried to call us out on our website–but he used a phony name, “Steve.” You can read the… Read more »