By Community Reports/Events on July 12, 2021 in General Misc. Stories
Sierra Wave Presents is brought to you by The Inyo Council for the Arts
Dick Tracy was an American detective radio drama series based on the popularity of the newspaper comic strip of the same name created by Chester Gould. 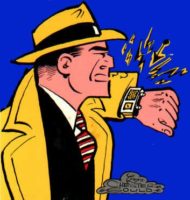 The show first aired in 1934 for the NBC Radio New England region. Himan Brown, a college student, arranged the radio rights for the comic strip. When the USA got involved in the Second World War, the show was temporarily cancelled. ABC  picked it up again from March 15, 1943 to July 16, 1948 and broadcast it on Saturdays.
Dick Tracy was a precursor to a colorful rogues gallery of villains and henchmen, that would later influence, Bill Finger and Bob Kane to create another beloved crime fighter, Batman.
I don’t now about you, but when I see people speaking into their smart watches, I can’t help but envision a yellow fedora on them as they speak into their wrist.
Don’t forget to tune in to Sierra Wave Presents for our airing of “Dick Tracy: Invisible Ink” with our new times, Monday at 11am, Wednesday at 3pm and Fri at 8pm…only here on Alt 92.5 KSRW.