By News Staff on February 13, 2020 in News Release, Press Release 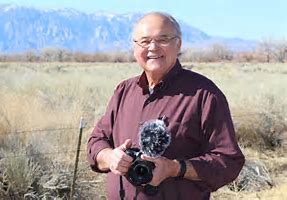 Charles has years of experience in the news business.

His position with Sierra Wave Media will be that of News Director. Duties include gathering news for broadcast on Sierra Wave Radio ALT 92.5 and a weekly TV News broadcast on TV3 to air every Friday.
Charles will also be in charge of posting stories to sierrawave.net and posting to our social media platforms.

“Although new to the broadcast news business, I have complete confidence in Charles being able to get up to speed in no time at all” said station manager BillLeFever.

“Charles has contributed news stories to our web site going back to 2006, so he was a natural selection to take on the position of news director” LeFever said.

Tune in for the Sierra Wave Radio Local News on ALT 92.5 with Charles James, Monday thru Friday at 7,8, noon and 5, and read his stories and more right here on sierrawave.net Soon to be broadcasting every Friday evening on Sierra Wave TV3.

Hey, that’s great! Charles is the right newshound for the job. Leigh & David