By Press Release on October 29, 2021 in Fishing Reports 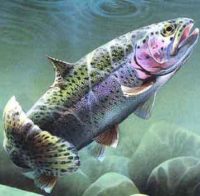 Fall colors are ephemeral and move down in altitude. They are now in the Owens Valley. Every tree is colored in yellow with a few red leaves here and there. The first winter storm left snow on the peaks of the White Mountains and the Sierra. Makes a beautiful back drop for the waters bathed in the yellow from the trees. The trout fishing in the Owens Valley is going off. Now is the time to get up here and do a little fall fly fishing before winter settles in.

Flows will be down to 110 CFS by the weekend and will be there for the winter. At these levels fly fishers have wading access to the entire river except for those holes that are deeper than the fly fisher is tall. A blue wing olive hatch is providing great action from 10:00 A.M. to 2:00 P.M. The fish are concentrating on the nymphs prior to the hatch and during the hatch. Nymphing under an indicator or with an Euro rig with size 20 bead head flash back pheasant tail nymphs, size 20 hot spot pheasant tail nymph size 18 olive quilldigons, size 16 Butano nymphs, and size 18 thread Frenchie’s is yielding wild brown trout and rainbow trout to 16 inches. In the right pools during the hatch enough trout are feeding on the hatching blue wing olives to make it worth throwing a size 20 blue wing olive parachute.

Hot Creek:
Interpretive Site:
Low clear water and selectively feeding trout make the interpretive site a tough spot to fly fish. The morning trico mayfly hatch have the trout feeding, but it’s tough to get the trout to take an imitation. Size 24 female trico parachutes and size 24 trico spinners are fooling a few trout. About noon the blue wing olive hatch and the gray caddis hatch starts and the trout are feeding on the hatching insects until 2:00 P.M. Blue wing olive parachutes in size 20 and gray partridge spent caddis are fooling wild brown trout and rainbow trout up to 16 inches.

Hot Creek Canyon Section:
Fly fishing in the morning with baetis nymphs is producing wild trout for fly fishers willing to drift nymphs through the weeds. At noon the blue wing olive mayflies begin to hatch and the trout are taking the emergers. Fishing with size 20 blue wing olive parachutes and size 20 pheasant tail paranymphs are fooling the wild brown trout. The gray caddis continues to be fed on by the trout in the early afternoon. Fishing with a gray spent partridge caddis, gray parachute caddis, and a gray X-caddis is fooling the trout.

Upper Owens River:
Above Benton Crossing Bridge:
It’s the end of October and trophy trout are starting to show up in the river. I prefer to leave the spawning trout on redds alone and fish the migrating trout in the deep pools and holes where they are resting and feeding. Instead of throwing egg patterns and San Juan worms I throw stonefly imitations. My best two trophy trout flies for the upper Owens River are the stoner nymph and the green/gold wire prince nymph in size 12. These flies need to be drifted right on the substrate to get the trophy trout to take. The river has stabilized at 120 CFS and the resident trout are taking size 20 pheasant tail nymphs and size 16 gold ribbed hare’s ears.

Upper Owens River:
Below Benton Crossing Bridge:
Trophy trout are finally leaving Crowley Lake and migrating up river to their spawning grounds. As the fish move up river they are resting and feeding in the deep pools and runs. The fish in the river just above the lake are on a mission and it’s hit or miss finding them. Covering lots of water will allow fly fishers to find pods of fish moving through the river system. These fish are here today and gone up river tomorrow. Fishing with streamers and nymphs is the most productive. Size 12 stoner nymphs and green/gold Prince nymphs are the most productive nymphs to use. For streamers size 6 or 10 black slumpbusters, and black wooly buggers are fooling the trout. Fish the streamers right down on the substrate in the deep holes, cut banks, and deep runs.

Bishop Creek Canal Behind the Ford Dealer:
Middle of the day a small blue wing olive mayfly hatch is causing the trout to feed heavily on nymphs and emergers. The dry and dropper method with a size 18 olive quilldigon, size 20 bead head flash back pheasant tail nymph on three feet of 5X under a size 16 Adams parachute is fooling a bunch of wild brown trout from six inches to 10 inches. A nymph indicator with a pheasant tail or olive quilldigon five feet under the indicator is fooling the wild trout. The action slows down in the late afternoon even though there are the occasional trout feeding on the nymphs.

Where are you going to Fly Fish , Any Remaining quality water with the rare but surviving naturals are located on private property such as the Arcularius ranch. While The Drought has basically ended and the worm has turned (AS I EXPECTED) with the global Warming/Climate Change hoax , (Liberal… Read more »