The Owens River Water Trail may have taken a step closer to reality.

We’ve said that quite a few times and maybe this time it’s more than just blind optimism. 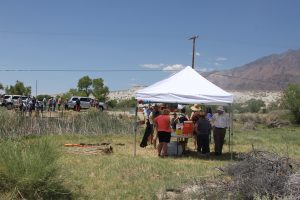 The start of the tour of the proposed Owens River Trail/File photo.

Representatives from Team River Runner in San Diego, the LA River Expedition, Sierra Club, Owens Valley Committee and the instigator of the trail, Eastern Sierra Waterways Project addressed the Los Angeles Department of Water and Powers Commissioners at its meeting Tuesday, urging the department to sign off on the environmental consultant agreement that’s been holding up the project for the last year.

In the past, groups speaking during the public comment portion of commissioner meetings have been successful and indications are the speakers Tuesday morning will be as well.

Here’s a brief background: Inyo’s Water Department was granted $500,000 from the state Department of Natural Resources to open up 6.3 miles of the Owens River – from Narrow Gauge Road north of Lone Pine to the pump back station. The end result would be a waterway for kayaks and canoes. Eastern Sierra Waterways Project’s Randy Short, also a member of the Boating and Waterways Commission, was instrumental in potential funding for handicap accessible infrastructure at the put in and take out—adding a new dimension to the water trail.

Now the complicated part. The funding wouldn’t start until Inyo gets a site agreement with LADWP; LADWP wanted environmental work done before they’d sign off on that agreement. Inyo hadn’t anticipated a full CEQA study and had no money for one. We call that a stalemate.

A strong show of support at a Standing Committee meeting last February resulted in LADWP agreeing to pick up the tab for the California Environmental Quality Act work. A consultant has been agreed on – Environmental Science Associates; a price tag, $496,510, has been identified; all LADWP has to do is pull the trigger.

Dale Osborne with Team River Runner explained the value of kayaking as part of the recovery process for wounded veterans. The San Diego chapter supports three paddles a month and Osborne saw the potential for the Owens River Trail as a site for the group’s training program and a destination for other groups.

Veteran Simon Jackson, a wheelchair-bound beneficiary of the program, thanked the department for its support. He described the experience as life changing. “Getting out on the water,” he said, “I’m on an equal footing with everybody.”

The LA River Expedition has been behind the project from its beginning. Education Coordinator Scott Cher described the river trail as a valuable amenity and asked the commissioners to expedite the environmental phase.

Sierra Club’s Mark Bagley addressed the commissioners from LADWP’s Bishop office. “The water trail meets one of the goals of the Lower Owens River Project,” he said. In addition to the recreational possibilities, the project will open up the 6.3-mile stretch of tule-tangled water way, improving flow and water quality.

OVC’s Richard Potashin called on the department to heal both veterans’ battle scars and the last 100 years of water wars in the valley. “LADWP’s concerns can be resolved and addressed,” he said. “Get behind and not in front of this project. It’s good PR.”

The project is time sensitive—the funding door closes in March 2021. According to the county’s mitigation manager Larry Freilich, the CEQA process could take a year or more with work, hopefully, starting during the winter of 2018-2019 and completed the following winter.