By News Staff on December 13, 2011 in Government Agencies/Utilities 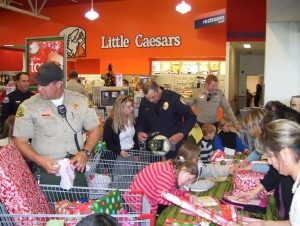 Officers and others even helped wrap the kids' gifts.

For those who wondered about the some 20 police cars, red lights and sirens blaring, driving down Main St. in Bishop from Whiskey Creek to Kmart on Saturday, it was all about bringing a happy Christmas to locally disadvantaged homes.

Mammoth Police Chief Dan Watson explained that one of his officers, Rick Moberly, brought the idea of Shop with a Cop to the Mammoth Police Officers Association.  The members really liked the idea and went with it.  They contacted the Bishop Police Department, Inyo Sheriff and Mono Sheriff.  Everyone joined in to raise money and to give a child from disadvantaged homes $200 on gifts for their families and themselves.

School districts and others helped the officers identify families in real need.  The officers contacted the families with their plan and showed up 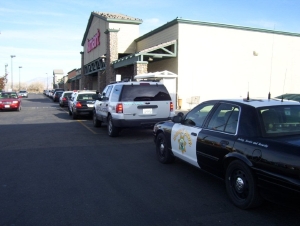 Officers drove the kids to Kmart with red lights and sirens.

at their homes, in uniform, on Saturday.  They went to Whiskey Creek for breakfast and then the officers gave the kids a patrol car ride with red lights and sirens to Kmart.  That ride raised the level of excitement which then turned into shopping.  Kmart gave the kids a 10% discount, so they effectively had $220 to spend on gifts for family and for themselves. Officers said most of the kids wanted to spend all of the money on their family members.  They had to be convinced that they should get something for themselves.

A crew of officers and others gift-wrapped the presents.  Both Bishop Police Chief Chris Carter and Mammoth Chief Watson were there on Saturday.  Chief Watson called it a rewarding experience for the nearly 20 kids.  He said, “They were so appreciative.”  Watson was also glad to see the idea come from one of his men and find so much support. One more thing.  Bishop Police Chief Carter said, “It was such a fantastic outpouring.  It was indicative of the apart of the season and who these officers are.  They did this as individuals and through their associations,” said Carter. “They took time out of their day to be with the kids.”

And, finally, as you might suspect, Santa Claus was there too.

Great job by Sergeant Moberly putting this program together!

Nice gesture for the kids that maybe weren’t going to have much of a Christmas!

The Eastern Sierra has a great group of Officers and Deputies! They are all definitely what I miss the most about working in that part of the state. Merry Christmas!

Merry Christmas, Charlie. Email me with your email address. K