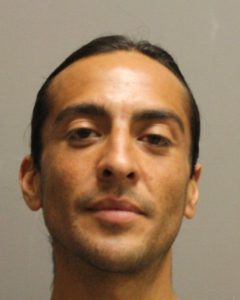 While Deputies were responding they were diverted to Southern Inyo Hospital, for a gunshot victim in the emergency room.  When Deputies arrived, they were advised that a 9 year old female had been shot one time.  The bullet struck the side of the victim’s neck near the top of her shoulder.

The victim was later discharged with non-life threating injuries.

Investigators from the Major Investigation and Narcotics Taskforce (MINT) interviewed the shooting victim and her parents, and a positive identification was made of the suspect.

The suspect was determined to be 34 year old Lone Pine resident Jeremiah Joseph.

Joseph was arrested without incident Tuesday morning and booked into the Inyo County Jail this afternoon for six counts of Attempted Murder, Shooting at an occupied vehicle, and Battery causing great bodily injury.

Just like you don’t bring a knife to a gunfight, you shouldn’t bring your kids with you when you are up to bad stuff. The “poor, innocent” family of this decidedly unfortunate child (who at midnight should have been home in bed) should be up on charges of child neglect… Read more »

Hey maddawg how about the poor innocent family doesn’t take a 9 year old to try and settle a drug debt! Parents of the year!

I’ve got an idea ! Let the family of the poor innocent 9 year old girl who was shot in the neck, let them put the shooter in a car and shoot multiple rounds into it and see how he likes it! COWARD!!!