By News Staff on March 16, 2015 in General Misc. Stories, Obituaries 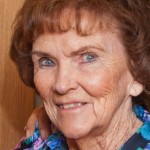 Shirley and Emmett, who was employed by LADWP, moved to the Owens Valley in 1950. They spent 30 years moving throughout the valley with his job, and in 1980 they settled in beautiful Big Pine.

Born on July 11, 1923 in Santa Monica, California, Shirley had many careers in her life. One of interest was being a “Rosie the Riveter” during WW2 in 1942. However, the most important thing in her life was giving her family and friends “unconditional love”. Grandma Shirley will be remembered by her bright blue eyes, nurturing personality and her beautiful smile. She loved music, dancing and celebrating life.

A viewing will be held on Friday March 20th from 4-6 pm at Brune Mortuary, 325 West Elm Street, in Bishop.

Services for Shirley will be held at 2:30 pm on Saturday, March 21st, 2015 at the Big Pine cemetery, with a celebration of life to follow at the home of Dan and Tammy Deyo, 700 Glacier Lodge Road in Big Pine.