Aside from the obvious inconvenience of surroundings in disarray, Mono Sheriff Rick Scholl said the clean-up of the flooded jail and offices in Bridgeport is going “very well.” 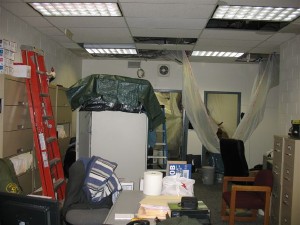 Sheriff Scholl spoke first about the silver lining of the near disaster. It was a heavy downpour earlier this month that seeped into the jail roof project and flooded the entire building. The Sheriff said the good news is painting, new flooring, ceiling tiles and dry wall in most of the facilities.

Scholl said crews will paint the entire jail side and install new smoke and fire detectors. The jail cells themselves will be completely repainted as will tables and other areas. New floors will go in and new ceiling panels over office space. The Sheriff admitted it’s a pain and that it’s taking a lot of hard work to make it happen.

Scholl focused on the positive – the new facility aspect and the fact that Inyo, San Bernardino and El Dorado counties are housing inmates. He said that the contractor is hard at work on completion of the new roof project.

The Sheriff said he is very proud of his employees who have rolled with the disruptions. Scholl said he feels confident that the jail and offices will re-open around November 9th.