Tensions ran high in Suite Z as the Mammoth Lakes Town Council convened once again on budget issues. After budget consultant Tom Foley from MTRiP reported his firms analysis that the Town needed to cut another $624,000 from the proposed budget, things got ugly before the Council was able to get around to approving the budget. 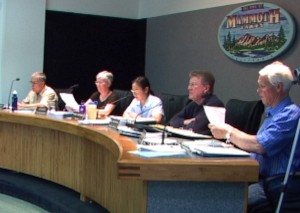 Former council member Rick Wood pointed out that he had asked for numbers and data like these 16 months ago and was told at that time he was having a knee-jerk reaction. 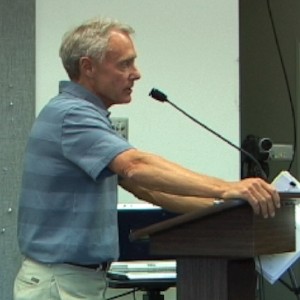 Sugimura stated that she was tired of personal attacks and would no longer take part in tit for tat arguments. Wood tried to speak again but Sugimura would not allow it and told him to sit down. After reeling through a similar scenario with developer Ward Jones over the Village parking structure, Sugimura got on with the meeting.

It was unclear as they prodded their way through the proposed budget items whether or not the Council was keeping in mind the mantra, Pay as you go, that the public had asked them to use that evening. They still approved items that were unknowns, such as $3 million in property taxes that they may or may not receive. Projections for property taxes are somewhat unclear at this time because so many people are having their homes reassessed.

Council did ask for follow-up reports on items such as this one, as well as other items that would not require spending money right away like the ice rink. Council will take another look at the dollars in relation to the budget before spending the money. Staff will prepare the first report for the July 15 Council meeting. The first report will list options of how to cut the $624,000 that MTRiP recommended cutting. Options will show examples both using reserves and without using reserves. Council member John Eastman stated several times throughout the meeting that he was not in favor of using reserves for anything at this time since the REU had already been drawn down $9 million leaving the account with approximately $10 million. Town Manager Rob Clark explained that $5.77 million had been used in capital reserves, which is DIF money sitting in the account waiting to be used on capital projects. Of the remaining $3.6 million in reserves that had been used, $1.6 million had been spent on the Hot Creek Litigation.

Out of the 45 decisions Council left 35 in the budget either as approved items or those needing an extra report. The 10 items that were cut were: funding environmental sustainability programs, using grants to complete environmental analyses for Parks and Recreation and Trails plans, community engagement capacity building, developing a new Town website, shift staff efforts to increase code compliance efforts, hold a 25th TOML Anniversary Commemoration, construction of the Manzanita Shady Rest Tract connector path, completing the Mobility Plan EIR, continuing the air quality monitoring contract with Howard Sheckter, and a $25,000 Council Discretionary Fund. The $25,000 will instead be used to fund the High Sierra Energy Foundation.

Council approved this version of the budget with a 5-0 vote.

We work to provide daily news to all of the Eastern Sierra, in the tradition of Eastern Sierra News Service and the Sierra Wave. We bring you daily happenings, local politics, crime, government dealings and fun stuff. Please contact us.
View all posts by News Staff →
Inyo DA Continues Work on Bar Fight Investigation
Cottonwood Plaza Land Owner Takes Over