By News Staff on June 13, 2012 in Government Agencies/Utilities

Good-byes lately for officials.  Long-time Mono County District Attorney George Booth stood up for recognition of his retirement after 27 years.  The Mono Board passed a resolution of appreciation.  The resolution author used some creative writing.  It said in part:

“George established himself as an effective and competent defender of the accused (crooks) and after several years moved into private practice. Representing everyone from drunks to murderers, his excellence in defending crooks allowed him to live the high life and live near the ocean while utilizing his swimming skills to swim with the sharks. George finally saw the light and figured out that crooks really are crooks. This enlightenment allowed George to move into the light and transition over to being a prosecutor.”  Wow.  Did a prosecutor write this?

A note from the Bureaucrat Beat Newsroom – DA George Booth and his staff have always openly and respectfully communicated with us on criminal cases of interest to the public.  Booth consistently made himself available at any time we needed help to inform the public.  Thanks, George. 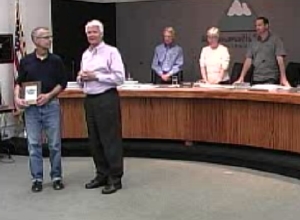 The Mammoth Town Council thanked Councilman Skip Harvey for his years of service as he prepares to end his term.  Harvey has always respectfully spoken to us in the Newsroom.  Harvey was the only Councilman to speak out boldly and candidly on what has really been bothering the Mammoth people – that ugly $43 million debt and some questionable actions related to it.  Harvey also called out some officials and others for chronic arrogance, leading to big and expensive trouble.  But what we really liked last Wednesday was how Harvey described the Eastern Sierra and Mammoth Lakes.  He used the words “enchanting and mystical.”  Thanks, Skip.

Unlike Wisconsin, government employees here still have collective bargaining.  As we have reported, Inyo employee groups now deal with the County over what has been described as salary increases through classifications for about half of the employees.  Few are commenting.  Employees don’t like the fact that they have not had a cost of living adjustment for three or four years, and they just heard about the new negotiations less than a month ago.  News flash – many people have no jobs or have had no pay hikes for 15 years or more. Health insurance? Ha!!!  It’s tough out there.

It’s sweet in the world of Glenn Frey – famous member of the Eagles years back.  Now, Frey, whose voice has navigated the decades, has a new album.  Yep.  He’s singing standards.  We dig, “Shadow of your smile” on Frey’s new album, “After Hours.”

Jesse Ventura, former pro-wrestler and Minnesota Governor, wasn’t smiling when he compared Democrats and Republicans to street gangs.  A few years back Ventura said the two major parties have turned elections into “panhandling and bribery.”   More recently, he said he wants to abolish the two parties.  He has a big problem with corporations that are now considered people and can spend enormous amounts of money to influence elections. As one of our own in the Bureaucrat Beat Newsroom said, the problem isn’t the parties. It’s the filthy lack of character in people (including corporations).

Mammoth’s Assistant Town Manager Marianna Marysheva-Martinez thanked Doug Kriese, former Mammoth Airport employee, for writing an email to her.  Last year, Kreise lodged complaints about airport safety issues.  In his email, Kreise questioned why a position at the airport was not advertised.  He asked if this were a manipulation by then Airport Director Bill Manning.

Kreise also alleged that another person had overheard Manning bragging that when former Town Manager Rob Clark fired him in 2010, he would fight and went to see Councilman John Eastman.  The rumor went that Manning was re-instated.  We in the Bureaucrat Beat 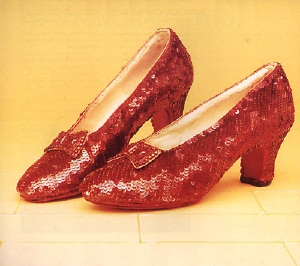 Newsroom had heard about this a couple of years ago.  Kreise further alleged that there was trouble with airport response recently when al pilot did not put down his landing gear and slid onto the runway.  He alleges pressure to keep him unemployed at the airport and asks to be reinstated.  Martinez said the Town would investigate.

On to another fantasy.  Speaking of enchanting – Dorothy’s ruby slippers from “The Wizard of Oz” have landed in the Smithsonian Institution in Washington, D.C.  The slippers line up with other pieces of American history like  part of the Plymouth Rock, Alexander Graham Bell’s phone and Kermit the Frog, plus a slave ship manifest.  Said Marc Pachter, the museum’s interim director, “This is a broader definition of what is important to remember.”

Mistrials, guilty and not guilty
LADWP vs. MCWD back in court
4 Comments
Newest
Oldest Most Voted
Inline Feedbacks
View all comments

In Marxist theory, pure communism is a specific stage of historical development that inevitably emerges from the development of the productive forces that leads to a superabundance of material wealth, allowing for distribution based on need and social relations based on freely associated individuals. The exact definition of communism varies,… Read more »

Just wondering how we’ve gone backwards so far…Think of our grandparents generation. Most did not have a college degree and many didn’t even graduate high school, but entered the working world at 15 or 16. My grandpas were a milk man and a coal minor, both had a living wage,… Read more »

eye of the beholder

I see long-timer John Eastman keeps getting elected year after year after … You remember John. He was the guy who had a lot to do with the … ahem … airport fiasco. But let’s just forge ahead – okay? Though John sports a brand, new spanking look (I was… Read more »

When are people going to get wise to the guy who has more fingers in pies than Betty Crocker, and has been pulling Mammoth strings longer than Methusala – John Eastman?
Don’t you wish you were his son-in-law-to-be?