By Charles James on May 15, 2020 in General Misc. Stories, Government Agencies/Utilities 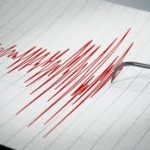 Wake up call by earthquake near Tonopah, Nev., rated at a magnitude of 6.5.

There’s nothing quite like being woken up a little after 4:00 a.m. because, well, the whole house is moving in a rolling motion, making  lamps and overhead fans sway, and the pets are acting like, “whaattttt?,” and you and the wife are in a dead sleep. Most people much prefer to be woken up by their alarm clock. It seemed to last around 20 seconds or so. And there have been numerous aftershocks reported, which is normal. To live in California is to know living with earthquakes.

The Nevada Department of Transportation also reported “minor pavement damage to a half-mile section” of U.S. 95, north of the U.S. Route 6 junction in Tonopah.

There was a 6.5-magnitude earthquake in a remote area of western Nevada this morning near Tonopah, Nevada. Apparently, it was the strongest earthquake there since the 1950s. It was definitely felt here in Inyo and Mono counties, as it was, according to reports, in Utah as well. It has been reported that it was felt even in Salt Lake City, Utah, which is hundreds of miles away from the epicenter identified by the U.S. Geologic Survey.

There have been initial reports of minor building damage and road damage. Reports of broken windows and food falling off shelves in grocery stores have been reported. Fortunately, there have been no reports of any casualties, although one possible casualty is being invested.

Facebook lit up locally, as did Esmeralda County Facebook, reporting that U.S. 95 from the U.S. 6 (Coaldale Junction) from Esmeralda County to the U.S. 95 and Nevada 360 Junction in Mineral County is closed. It advised using” U.S. 6 to NV 360 as an alternate route. Please use caution.”

Mineral County Sheriff’’s Office has reported some damage to U.S. 95 at mile marker 89. Damage to the roadway also was confirmed in Esmeralda County. The Nevada Department of Transportation also reported “minor pavement damage to a half-mile section” of U.S. 95, north of the U.S. Route 6 junction in Tonopah, an area familiar to many residents in Inyo and Mono counties from trips made from California over to Nevada.

The extent of the damage in this remote area is still coming in. Sierra Wave will provide more information as it becomes available.

SLC is four hundred miles away.