Now that you can get here from there, San Francisco may pay more attention to Mammoth Mountain. The San Francisco 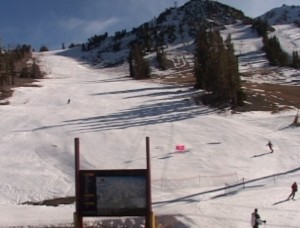 Chronicle devoted lots of space to a review of Mammoth. The key news – daily flights from San Jose to Mammoth Airport.

Writer Bill Fink said, “This formerly not-quite-close-enough mountain is now reachable via an airborne journey of just 55 minutes.” The special to the Chronicle describes the Horizon Air flight from San Jose to Mammoth. Writer Bill Fink likes the way flight attendants pour microbrew out of 40-ounce bottles. He says it’s a short flight, so drink up and watch “the pine-tree-covered mountains and cloud-filled valleys looking like fluffy white lakes.”

The rest of the article praises Mammoth’s mountain and slopes with a few compliments for the Village at Mammoth. Fink says, “Mammoth Mountain village is the typical prefab resort-style conglomeration of overpriced gift shops, fake-authentic theme bars and restaurants that still manages to be a fun place to stumble around during a snowy winter evening.”

The reporter describes his way around the slopes. Fink even joined a snowboard camp with boarders half his age. He liked the ski and snowboard schools and called the Woolly Mammoth “some poor fool dressed up like a skiing mammoth to amuse the kids.” Hey, Fink, we like Woolly.

Anyway, new air service leads to free publicity in the City by the Bay.

New State Water Law Manageable in Mammoth, Troubling to Some in Sacramento
Dose of Fall