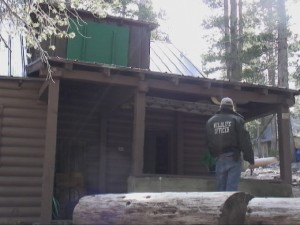 The cabin owner, Lou Capaso of southern California, had nailed boards up on all windows and tried to secure his cabin that bears have invaded six times. His family has rented from the Forest Service since the 1930s. Searles pointed out that this was the same cabin where Blondie the bear had broken in and was shot earlier this summer.

That’s a topic Police Chief Dan Watson continues to pursue. In fact, the Forest Service has now considered a possibility 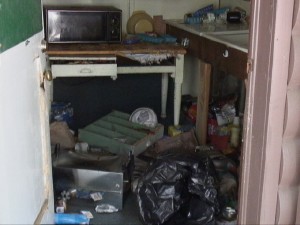 presented by Watson. In the meantime, it’s hands off for Searles on Forest land.

Friday, a bear chewed through the door of the cabin and trashed the place in search of food. Searles said, “If you don’t reprimand the bears and don’t teach them those boundaries, then this kind of thing can happen. I hope this bear does not need to be destroyed.” (Bill LeFever talked to Searles at the cabin site:)

Searles said without adverse conditioning and without his ability to monitor and work on the situation, more bears may have to be destroyed. In Friday’s break-in, no one was in the cabin. Searles said the bear went to “huge efforts to get in.” Searles called the situation the “epitome of the lack of cooperation among the different departments that have jurisdiction in this area. Bears aren’t aware of jurisdictional lines.”

In the Lakes Basin where bears go unchecked, more than 30 break-ins, while in the Town of Mammoth there have been zero break-ins and home invasions by bears. Searles called it a lack of management and stewardship.

We work to provide daily news to all of the Eastern Sierra, in the tradition of Eastern Sierra News Service and the Sierra Wave. We bring you daily happenings, local politics, crime, government dealings and fun stuff. Please contact us.
View all posts by News Staff →
Bureaucrat Beat: Political Pox, LA Watchdog, and Drug Tunnel
Narcotics Agents Arrest 6 Bishop Locals for Sales of Vicodin and Marijuana