With high security and tearful family members of victims, Lupe Almaguer walked from the Mono County Jail to the 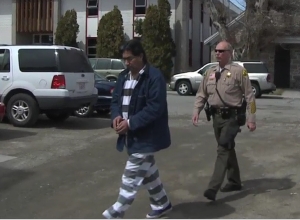 Bridgeport Courthouse for a sentencing hearing. His attorney, Dave Hammon, asked for a continuance and Judge Mark Magit granted it one final time.

Jonah Matthewson reported from Bridgeport for the Sierra Wave that the scene at the courthouse was a flurry of activity – court staff, deputies and victims’ family members, some of whom were in tears as they waited for Almaguer to appear in the courtroom.

Lupe Almaguer took care of children in Mammoth Lakes for many years as a day care provider. Last October Mammoth Police arrested him, alleging that he had sexually abused two children in his care who are now adults. After further investigation, Almaguer pled guilty to four felony counts of child molestation.

Yesterday in court, a motion was made to continue Almaguer’s sentencing once gain. Deputy District Attorney Todd Graham argued to move forward with sentencing. He told the court that families of victims were in the courtroom, that the voice of the people wanted to move ahead. Graham said Almaguer “needs to be sentenced now for justice to prevail.”

Judge Magit said the defense does have the right to take time needed. He allowed a continuance until April 26th when, said Judge Magit, there will be a sentence.

Almaguer faces the possibility of 15 years to life for each of the four counts against him.

We work to provide daily news to all of the Eastern Sierra, in the tradition of Eastern Sierra News Service and the Sierra Wave. We bring you daily happenings, local politics, crime, government dealings and fun stuff. Please contact us.
View all posts by News Staff →
Fish and Game still challenged to change killings of mountain lions
Sgt. Eric Hugelman – back on the job