By News Staff on January 29, 2014 in Government Agencies/Utilities 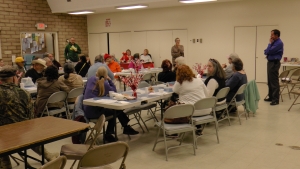 A meal and someone to share it with – dozens of Inyo County senior citizens look forward to that every day when they go to the closest senior citizen center and have lunch. So when County officials started to work on what they call Service Redesign, to try to save money, word spread that lunches for seniors might change, that the jail kitchen might handle their meals instead of the senior centers’ staff. Employees and seniors reacted with fear and concern. Health and Human Services Director Jean Turner has tried to assure everyone that no decisions have been made.

Turner stood up in front of the Inyo Supervisors this week after she and Sheriff Bill Lutze went to a meeting in Lone Pine where 45 senior citizens and staff engaged in what she called “robust, healthy discussion.” Turner said the first comment she heard at the meeting was that the Service Redesign efforts would men people getting fired. Said Turner, “It’s scary for our workforce.” Turner said if someone’s job is threatened, she will try to move them to another job internally.

The other fear, she said, is the loss of the personal touch of the kitchen staff that seniors enjoy. Said Turner, “You can’t put a dollar sign on that, especially if they come for human contact.” She said it would help employees to communicate the rules about layoffs.

Turner said she will look at senior meal program models around the State, and she said she committed to the crowd to keep them informed. She repeated that no decisions have been made. Turner and many other County officials and other agencies have been meeting in workshops to look for ways to collaborate, consolidate and change services to reduce costs. The County faces a some $2 million shortfall next year due to employee costs.

Supervisor Linda Arcularius said socialization for seniors would not necessarily have to be tied to food. Said Arcularius, “The way meals are prepared does not necessarily mean they can’t eat together.” Jean Turner stressed that fear has overcome some seniors and staff. Turner and Sheriff Lutze also met with seniors at the Bishop Center on Wednesday.

Seat belt protected driver
Letter to the Editor: Stand up for our water
4 Comments
Newest
Oldest Most Voted
Inline Feedbacks
View all comments

“Robust healthy discussion” is a polite way to say the assembled Seniors handed somebody their backside and sent them back to the office with some bites to sit on.

In Mono County, salaries of Department heads were reduced.
Things must be prospering in Inyo.

Why on earth did the County give big raises this year when programs like these were being threatened? It does not make any sense.

Creating jobs and taking care of their elders is working really well on the reservation. God forbid we do this.