On August 5th at about 5:20pm, the Inyo County Sheriff’s Office was notified through CalOES of a SPOT device activation near Jigsaw Pass. The activation was followed by a message asking for a helicopter for an immediate evacuation due to an injury. A short time later another message was sent saying, “fatality.” Two Inyo County SAR members responded to the coordinates of the SPOT activation. 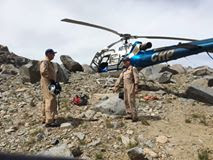 On August 6th at about 7:00am, CHP H-80 arrived and with the assistance of the Inyo County SAR team, H-80 was able to recover the body of Stephanie Subak (58 years old from Seattle, WA) and transport her to the Sheriff’s Posse Hut near the Bishop airport, where she was then driven to Brune Mortuary.

Interviews conducted with her hiking friends who were with her at the time of the accident indicated that Subak was descending down Jigsaw Pass when a rock that she grabbed onto gave way, causing her to tumble about 40 feet down a chute. 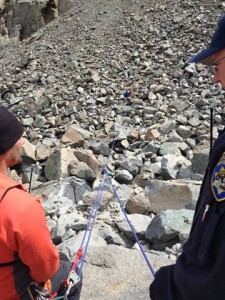 Once Subak’s partners got to her, she was unconscious but breathing; she passed away about an hour later. According to the coroner Subak sustained multiple traumatic injuries that caused her death.

The Inyo County Sheriff’s Office extends our sincere condolences to Subak’s family and friends during this very difficult time. We also would like to thank the Inyo County SAR team and H-80 for their response efforts.

The SPOT device used was actually a DeLorme inReach which has two-way text capability without cell coverage. There’s a basic version and one with all of the “bells & whistles” for techies. The version without two-way text is the SPOT GEN 3.

Jigsaw Pass is very unstable. I, too, was involved in an accident due to rockfall while descending Jigsaw several decades ago. The injured party lived but with permanent brain damage. There was a helicopter rescue of the injured person who was airlifted to Reno. Condolences to the friends and family… Read more »

I had a Spot. I was planning on going up the South Fork but the creek was too high to cross alone, so I went back down and up the North Fork. I messaged my wife the coordinates three times. She never got my messages. I traded it in for… Read more »

Only time I ever used a SPOT devise I was going to the Barker Ranch in Death Valley….took one along just in case of truck problems along the way.When I got to the ranch,set it off to alert I had made it O.K….but who I sent the message to never… Read more »

and here I thought John was a know it all. So he is human

A SPOT device is a small GPS receiver/satellite transmitter. It has several features, the primary one being a single press of a 911 button to send an SOS message along with your GPS position to a satellite. The satellite downloads your SOS to a control center, which in turn relays… Read more »

Thanks for the info.

Precipitable Water – measure of the depth of liquid water at the surface that would result after precipitating all of the water vapor in a vertical column over a given location, usually extending from the surface to 300 mb.

I have carried and used a SPOT beacon for several years. It’s a light (6 oz) radio transmitter with a GPS receiver. It can bw used to send three (or more depending on model and equipment) messages, from ‘OK’, “need help’, or ’emergency’. All meesages include the GPS position. You… Read more »

We all know when we go into the high country, we accept a degree of risk. Unfortunately, this woman ended up with some bad luck. There but by the grace of god, go I. Rest in peace my lady.