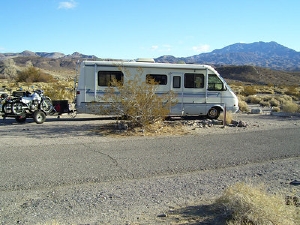 The missing man was last seen at the Mesquite Springs Camp ground in Death Valley.

UPDATE:  As of 1:42pm on Thursday, March 15, there is no new information on the search for Mr. Kohler.  The Inyo Sheriff’s Department will keep us updated.

According to Inyo County Search and Rescue Coordinator Terry Watterbury, “The bicycle tour group camped Monday night at the Mesquite Springs camp ground in Death Valley.  Kohler was seen by his fellow bicyclists at the campfire Monday night; at around 8:00 PM he said he was going to go to his tent and sleep, but the next morning there was no sign of him.”

Kohler was last seen wearing a blue jacket, navy blue t-shirt, and black pants.  Anyone who was on the Scotty’s Castle Road that may have seen Kohler or given him a ride is asked to contact the Inyo County Sheriff’s Office immediately at 760-878-0383.

Sounds like he left on foot,in the evening…..Time is running out for this to have a good ending…..Hope the Riverside Mountain Rescue Unit (RMRU),the group that successfully found the remains of the 1996 case involving the missing German family,as well as finding a missing Carson City man last year near Badwater gets involved…quickly…

Missing you and praying for you and your beloved wife George. Please return safely and soon.

I am wondering if you will post an update when you have it? George Kohler is a good friend, we are worried.

We definitely will. I spoke with the Inyo Sheriff’s Department this afternoon. There is currently nothing new to report and the search continues. Benett Kessler

Did he have his bike? Or any belongings?

We don’t know but will continue to check. BK

Hmm .. It doesn’t say whether he walked off in the desert, or if we rode off on his bike, or what? Or .. alien abduction?