By News Staff on September 12, 2011 in Government Agencies/Utilities 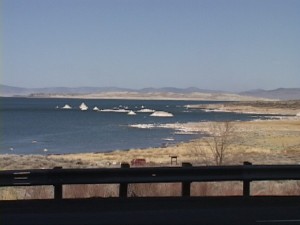 On Wednesday, September 7, 2011, the Mono County Sheriff’s Search and Rescue (SAR) Team responded to a call to search near Mono Lake for an overdue visitor. A Riverside, CA, couple, ages 66 and 71, became tired while canoeing on Mono Lake. The 71 year-old wife opted to walk back to the parking area at Navy Beach, which was only about ½ mile to the west.

The Mono County Sheriff’s Department sent a sergeant and deputy to the area and tracking was attempted near where the canoes had landed. Lee Vining and June Lake Fire Departments responded and began grid searching areas to the east and west of Navy Beach. The Search and Rescue team sent a team three miles to the east by vehicle with instructions to park and hike the shoreline to the west toward Navy Beach.

The deputy and a SAR member began to search dirt roads by ATV. While other tracking, hasty, and grid assignments were being made, the first SAR team reported having found the woman while enroute to their assignment. She was thirsty but otherwise in good condition.

send her a bill. The county needs the money