Two local man found themselves in trouble in the mountains in two separate cases. Inyo Search and Rescue team members came to the rescue.

Last Saturday night at about 8pm, Search and Rescue learned that Brian Jaegers, 30, of Mammoth Lakes was stuck in a 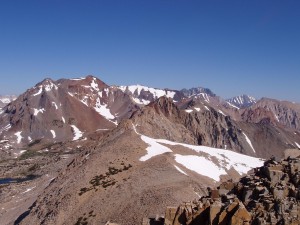 A Mammoth man was stranded in the Mount Tinnemaha area.

crack on the southeast area of Mount Tinnemaha. The Inyo Sheriff’s Department reported that Jaegers had shot a buck while hunting and then became trapped in an area where he felt he could not continue safely.

Jaegers called his mother on his cell phone. She called the Inyo Sheriff’s Office. About 20 minutes later, two Inyo Search and Rescue members went up the trail to help Jaegers with a technical rock rescue.

The two rescuers reached Jaegers early Sunday morning. They said he was dehydrated and cold but did not want medical help. The search team secured Jaegers into a harness and lowered him 100 vertical feet where he walked out with the team.

Sunday afternoon, a report came in for Search and Rescue. The report said that Robert Strong, 59, from Bishop, had broken a leg and needed help. Strong was hiking in the Treasure Lakes area, above South Lake, when he slipped from a bridge, fell into a creek and broke his femur or upper leg bone.

A passerby found him in the creek and helped him to a dry and safe area. The passerby hiked out and notified Parcher’s Resort personnel who called the Inyo Sheriff’s Office. The heavy forestation in the area prevented a helicopter rescue. Both Inyo and Mono Search and Rescue Team members assisted.

Rescue crews used a wheeled rescue basket and a pontoon to get Mr. Strong back to the trailhead. From there, he went to Northern Inyo Hospital.

We work to provide daily news to all of the Eastern Sierra, in the tradition of Eastern Sierra News Service and the Sierra Wave. We bring you daily happenings, local politics, crime, government dealings and fun stuff. Please contact us.
View all posts by News Staff →
Monroy Ordered to a Treatment Program
Accidents: Pine Creek Road, 395 at Oak Creek, and Badwater Road