The Mono County Sheriff’s Office (MCSO) Search and Rescue (SAR) Team is an all-volunteer non-profit organization dedicated to saving lives. When called by the MSCO, the Team responds for searches and rescues at any time, in any weather, for as long as it takes, for free.

Each year, the Team honors members for their individual excellence and public service. This is usually done at an awards dinner in December. But due to pandemic restrictions, it was delayed until a May 1, 2021, outdoor picnic held at Mono County Park.

The Team’s primary annual honor for achievement is the Pete Schoerner Rescue Member of the Year award. The award is named in memory of a beloved teammate who died in an ice climbing accident in 1996. 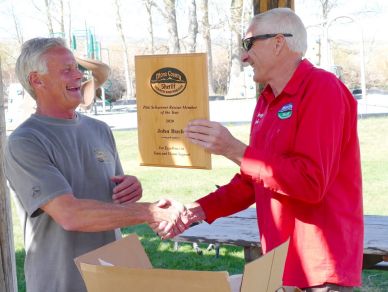 Pete Schoerner Rescue Member of the Year award was awarded to John Bush.

This year, the Pete Schoerner Rescue Member of the Year award was awarded to John Bush. John serves the Team as a member of the Board of Directors, as Vice President, Equipment Officer, and as a member of the Training Committee. He is a very active responder to search and rescue calls. Since joining the team, he has responded to 216 team events.

New members in training are called Candidate Members, and must undergo training, practice, and testing in eighteen skill categories before being considered for advancement to Rescue Member. Completion of all requirements takes a lot of dedication and faithfulness over a period that is typically a year or more. The Team honors one Candidate Member each year with the Rick Mosher Candidate Member of the Year Award. Rick Mosher is the only team member to have died in the line of duty while searching in a small airplane that crashed during an operation on August 15, 1979. 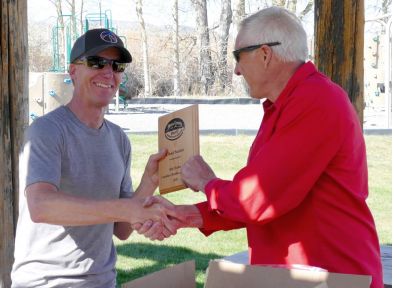 Chad Senior as the Rick Mosher Candidate Member of the Year

This year the Team selected Chad Senior as the Rick Mosher Candidate Member of the Year. Chad is very active in many aspects of Team responses to calls and training. Since joining the team, he has participated in 111 team events and has
advanced to Rescue Member. 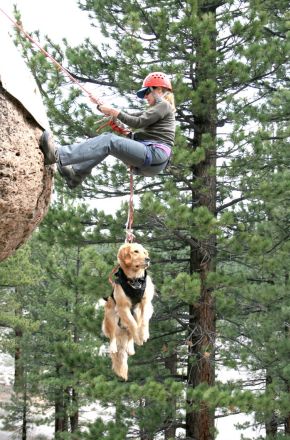 A 10-year service plaque was awarded to Christina Ackerman as well as a photograph of her and SAR Dog Takoda rappelling off a cliff.

The SAR team wishes to thank members of the community for their generous support since the Team’s founding 55 years ago in 1966.