By News Staff on August 8, 2016 in Government Agencies/Utilities

Shakespeare in the Woods August 11-21 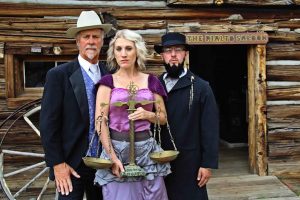 All aboard for Sierra Classic Theatre’s Shakespeare in the Woods production of “The Merchant of Venice.” Justice, mercy, money and love all play out against the backdrop of the 1869 western railroad frontier town of Venice, Wyoming.
Director Susan Dalian once again brings Shakespeare’s comedy and drama to life with a cast of local actors, featuring Airen Neeley as Portia, Matt Chaconas as Bassanio, Shaun Reitman as Shylock, and Charles Scatolini as Antonio.
Performances are Thursday through Sunday, August 11-14 and August 18-21 at 6p.m. at Sam’s Wood Site, 5699 Minaret Road in Mammoth Lakes. 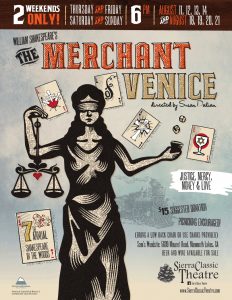 Suggested donation of $15 at the door. Come early to get a good seat. Beer and wine is available for sale, and you can pre-order a delicious meal from Bleu Handcrafted Foods (with at least 24 hours notice) or, bring a picnic.
Visit sierraclassictheatre.com or Facebook.com/SierraClassicTheatre for more information.

We work to provide daily news to all of the Eastern Sierra, in the tradition of Eastern Sierra News Service and the Sierra Wave. We bring you daily happenings, local politics, crime, government dealings and fun stuff. Please contact us.
View all posts by News Staff →
Celebration of Life for Marlene Courtney
Eastern Sierra Symphony performing this week in Mammoth