As one might expect, after the big news that NASA found a new life form at Mono Lake, other scientists have weighed in 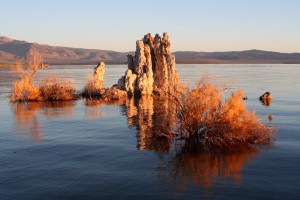 with a skeptical view.

The Los Angeles Times ran a story that “skeptical scientists expressed serious concerns about the discovery and the researchers’ interpretation of their experimental results.”

NASA scientists said that they found microbes that could spin DNA out of arsenic and could do without phosphorous, one of the six building blocks of life. That announcement opened up the possibility that different life forms, made of different chemicals, could exist in outer space.

The Times article that followed quotes Rosie Redfield, a microbiologist and professor of zoology at the University of British Columbia. She questioned the NASA team’s assertion that there wasn’t enough phosphorous at Mono Lake to sustain life, and she raised doubts about the method the team used to prepare the microbes’ DNA for analysis.

Other scientists from various universities also took issue with the findings. Still others said that a discovery that challenges firmly established knowledge about chemistry and life has a greater burden of proof.

NASA scientists said they drew conclusions based on what they saw, but they welcome lively debate. NASA will reportedly return to Mono Lake for further studies.

We work to provide daily news to all of the Eastern Sierra, in the tradition of Eastern Sierra News Service and the Sierra Wave. We bring you daily happenings, local politics, crime, government dealings and fun stuff. Please contact us.
View all posts by News Staff →
Broncos capture CIF title
AT&T finally responds to widespread cell phone problems in Inyo-Mono