By News Staff on November 5, 2012 in Government Agencies/Utilities 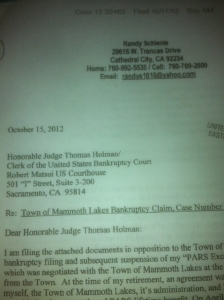 Add another angry police officer to the Town of Mammoth’s growing list. In October, former Police Chief Randy Schienle filed documents to oppose Mammoth’s bankruptcy filing. His complaint? A suspension of benefits that he said he negotiated with the Town when he retired. Schienele pointed to what he believes is a “consistent pattern of harassment on the Town’s behalf directed at me by certain elected officials on the Mammoth Lakes Town Council.”

In a letter field with the bankruptcy court, Schienele said he opposed Mammoth’s bankruptcy filing, which presumably will soon go away. Meanwhile, former Chief Schienle points out that his PARS lifetime benefits were suspended under the pending bankruptcy.

Schienle writes that prior to suspension of his benefits there was no communication from the Town of Mammoth Lakes or its legal counsel indicating that his benefit would be suspended. Schienele’s letter says that in speaking with Town Manager Dave Wilbrecht, he learned he was the only individual that was having the benefit suspended. Schienle said other retirees did not experience a benefit suspension.

Schienle wrote that Manager Wilbrecht told him that the former police chief’s pay exceeded $200,000 at the time of his retirement and put him outside the federal guideline for the PARS benefit. Schienle said his pay never exceeded $200,000. He also said that a document the Town claimed spelled out the terms of his benefits did not include his signature.

The weird thing is that we the town must pay MLLA for breaking a contract but yet we break more contracts to do so. The town must reduce it’s obligations proportionately to all it’s creditors but yet wipe out those it wishes to hence the past Chief. What I wonder… Read more »

Whether or not one questions how much the PERS and/or PARS pays in retirement is a separate issue. The issue here is that Chief Schienle had a signed agreement between himself and the Town of Mammoth Lakes. The Town willfully and knowingly violated the terms and conditions of the signed… Read more »

There are two sides to every story. We have not heard the Town’s side yet. Maybe Benett could call and ask.

All I know is you have to follow contract law….I hope the town is proceeding carefully and getting GOOD legal advice…I don’t want to see any more lawsuits!

Oh. Trust me this is just the start of the shady cops from Mono County filing for bankruptcy.. More to Come as their hidden corruption surfaces and the lawsuits kick it out in the public! PROMiSE!

Looks like the wrongdoing will continue. The town heads and Council are a bunch of following crooks. When will it end. On another note I thought that the deadline to file Opposition of the BK was sometime in Sept. and is it not moot that the BK has been settled… Read more »

Probably depends on how Schienle sees it and if he decides to take further action.
Benett Kessler

The town will not learn

This town is so corrupt it’s silly.
Someone needs to call the Feds. I hear the FBI will look into such corruption.
Out with all of them. Wilbrect too. Out with the trash.