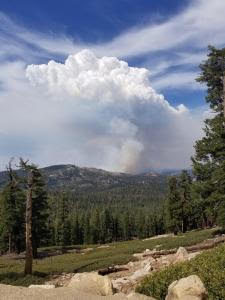 ***A Forest closure order for the fire area, including all roads and trails is in affect and will remain until the fire is declared out (Forest Order No. 0513-17-20).  For details regarding this closure, please go tohttps://inciweb.nwcg.gov/incident/5285

Suppression efforts on the Schaeffer fire have increased to a containment of 61%.  The southwest portion of the fire from the Forks of the Kern to Bonita Meadows is now considered contained.  The fire remains active on its northern border in the Kern River area, northeast of the Forks of the Kern, and on the eastern flank in the Beach Meadows area.  Protection measures are still in place for structures that may be threatened.  Similar conditions are expected today for those regions of the fire, which may result in smoke columns.

Firefighters continue to work along the Kern River and on the eastern perimeter to secure and hold the fire line.  Air operations will make water drops throughout the day to check fire spread and cool areas of intense heat.  Crews may use firing operations when the weather is ideal to consume unburned fuel between containment lines and the fire.

In advance of potential firing operations public and firefighter safety, as well as protection of property are top priorities.  “Burning out” is a tactic used by firefighters to assist in controlling fires.  Operations of this type are used during favorable weather to minimize fire severity.  Firefighters will wait for optimal conditions and continually assess the firing operation.  Smoke and fire may be visible.

Resources assigned to the Schaeffer Fire include 30 crews, 28 engines, six (6) dozers and ten (10) water tenders, and various overhead and support personnel for a total of 1,039 personnel.

Friday and Saturday will see a slight warming and drying trend.  Relative humidity may drop back into the upper teens during this time.

Update on State of the Inyo (National Forest)
Inyo County in process of ‘condemning’ landfill sites, reclaiming land from LADWP