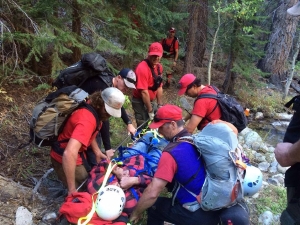 On the evening of Monday, September 22, 2014, at approximately 8:30PM, Mono County Sheriff’s Dispatch received a 911 call of a report of a lost hunter near Poison Creek.

Two hunters began a deer hunting and camping trip near Poison Creek. Shortly after their arrival, one of the hunters took his rifle and left camp. He told his friend that he wanted to do some scouting and would be away for about 20 minutes to return to camp by nightfall. When it got dark, the hunter had failed to return to camp. The hunter’s friend waited two hours but his friend never returned. He asked two other hunters in the area for assistance by they were unable to locate the hunter. The friend was concerned that the hunter, age 81, had possibly fallen and might be injured. The hunter was not equipped to spend a cold night outdoors.

The Mono County Sheriff’s Search and Rescue (SAR) Team was

called to assist in locating the lost hunter. Four SAR team members responded to the camp. In the early morning hours of 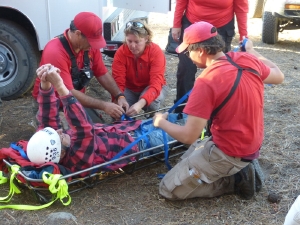 Tuesday, September 23, 2014, a hasty search of the area was conducted from the point where the hunter was last seen. The search area was covered in varying terrain including thick timber, willows, brambles, a creek and rocky slopes. There was no sign of the hunter. As the search continued, the California Office of Emergency Services (Cal OES) was contacted for mutual aid. More than 20 additional search and rescue personnel responded including deputies from the Mono County Sheriff’s Office; SAR teams from Alpine and Tuolumne Counties; and a helicopter from the California Highway Patrol (CHP).

The helicopter crew conducted an aerial search directed by ground personnel. Later in the afternoon, the helicopter crew spotted a person partially matching the hunter’s description lying in a wash east of the ground searchers. The person appeared to be unable to move but could wave at the helicopter. Ground searchers went to his location and confirmed it was the lost hunter. He had fallen down a steep section of wash and spent the night in cold temperatures. Although he was uninjured, he was exhausted and unable to walk out. He was evaluated by EMT’s and placed in a wheeled litter. Search crews evacuated him out of the difficult terrain. After evaluation by Mono County Paramedics, he was released to family who had come to the search base.

The Mono County Sheriff’s Search and Rescue (SAR) Team wants to remind everyone of the terrain challenges found throughout our area. There are many areas of the Eastern Sierra that are difficult to access on foot. Cell phones often don’t work in these areas and there is little natural light upon nightfall. People entering these areas should be aware of the risk of being delayed, exhausted or injured merely by the difficulty of negotiating the terrain. In any instance, if traveling, hiking, hunting, and/or camping in these areas, make sure to have the proper equipment with you and be prepared to spend the night in changing seasonal conditions. Be safe out there and Happy Hunting Season!

We work to provide daily news to all of the Eastern Sierra, in the tradition of Eastern Sierra News Service and the Sierra Wave. We bring you daily happenings, local politics, crime, government dealings and fun stuff. Please contact us.
View all posts by News Staff →
Ball Mountain Fire update
Mammoth man sentenced for enticement of a minor
3 Comments
Newest
Oldest Most Voted
Inline Feedbacks
View all comments

I’m sorry ,but 81 is just TOO old to be out hunting, wandering off alone. He should have stayed within yelling distance of his buddy. A set of 40 dollar walkie talkies wouldn’t hurt either. Common sense is getting to be not-so common anymore.

Any one know where Poison Creek is?