By News Staff on October 20, 2014 in Government Agencies/Utilities 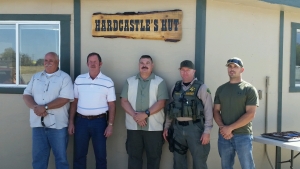 The building once served as a Forest Service helicopter base center. When the Forest Service transferred their operations to the Independence airport, the building was used mainly as storage. About six months ago the Inyo County Sheriff’s Office acquired the badly damaged building, and with the help from inmate labor and volunteer SAR members transformed the dilapidated building into a functional command center for south-county SAR operations.

Undersheriff Keith Hardcastle began his career in 1985 as an Inyo County Sheriff’s Deputy; he has been a SAR Coordinator since 1994. “When I began as a Coordinator for SAR it was a different era – there were no cell phones, no on-the-fly mapping technology; map and compass was how we got the job done,” said Hardcastle.

Sheriff Lutze went on to say that, “Undersheriff Hardcastle has been involved in countless SAR missions and his scope and depth of knowledge in local terrain has saved many lives. His legacy when he retires on December 30th will be leaving behind a highly trained and dedicated SAR team made up of volunteers and Sheriff’s Deputies who are both hardworking and knowledgeable. Undersheriff Hardcastle has been instrumental in training new coordinators and the Search and Rescue team will be in excellent hands with Deputy Nate Derr and Deputy Brian Hohenstein.”

Under Sheriff Hardcastle you will be missed.