A major building project for Bishop – one that will deliver a great deal of public service. Salvation Army officials held a press 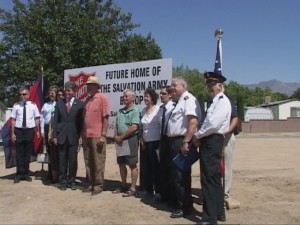 Local officials and Salvation Army officials gathered for a photo op on the new building site.

conference Monday on the edge of a large lot of vacant land off MacIver Street in Bishop where they promised a new headquarters with a store and offices to serve people in Inyo-Mono.

Officials pointed out that the Salvation Army’s commitment to communities in the Eastern Sierra is more relevant than ever. The new building will happen because of local donations and Salvation Army funds. One of the largest local contributors – Jerry Gabriel, former Caltrans engineer, who was on hand for the ceremony and sign unveiling. He generously donated a reported $132,000.

Officers now in charge of the Eastern Sierra’s Salvation Army, Tim and Kim Brown were also on hand. I spoke with Tim about human needs in the face of the down economy. He said the needs are greater than ever and that the new building will make wider service more possible.

The new building will consolidate all Salvation Army services here with the Bishop Family Thrift Store, social services and ministry in one location. Plans include a 15,000 square foot facility. The current store and office will continue service until the new center goes up.

We work to provide daily news to all of the Eastern Sierra, in the tradition of Eastern Sierra News Service and the Sierra Wave. We bring you daily happenings, local politics, crime, government dealings and fun stuff. Please contact us.
View all posts by News Staff →
Inyo and Mono Supervisors on Personnel, Travel and the State
Deputies Report Wild Chase that Lands Bridgeport Woman in Jail