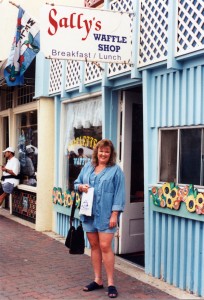 Sally was born in Pomona, California on September 28, 1950.  She was raised in southernCaliforniaand married her high school sweetheart John.  Shortly after they married John and Sally went on a wonderful tour of the United States to find the perfect place to live and raise their family.  They eventually settled in Mono County where they lived for 34 years.

Sally was employed for many years at Mammoth Hospital.  She was professional and efficient in her job and everyone who ventured into her warm and welcoming office became a friend.

Sally was an enthusiastic member of Calico Quilters Quilt guild and she donated many quilts for various local charities as well as making sure every friend having troubled times received a friendship or prayer quilt.  In addition, she donated several quilts to the Quilts of Valor Program for soldiers returning from overseas. Sally was also involved in the Mammoth Sunrise Rotary, Mammoth Hospital Auxiliary, Mammoth Lakes Women’s Club and many other volunteer organizations.

Sally had a large heart, was much loved and will be sorely missed.

The family has requested no flowers  but instead donations in her name can be sent to the Long Valley Fire Fighters Volunteer Association or the Mammoth Hospital Cancer Outreach Program.

I was saddened to learn of Sally’s passing. We worked together for six years at Mammoth Hospital. She was professional, thorough in her work and consistently maintained a positive outlook. Sally was truly a great person who lived her life with integrity and had a real heart of service. She… Read more »

I will second your comment, Judy! My life is better because I knew Sally. She will always have a special place in my heart! Her personality, smile, laugh and just overall demeanor was amazing! She truly touched all those who knew her! You will be greatly missed, my friend!

As your picture of Sally shows she had the most beautiful smile and wonderful laugh; and man could she quilt!!! My life is better because I knew Sally. She will be greatly missed!