By News Staff on March 7, 2014 in Government Agencies/Utilities 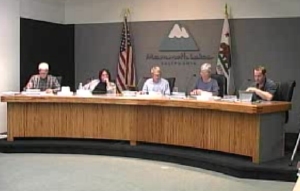 With an argument that they have excluded the less wealthy in Mammoth Lakes from a seat on the Town Council, a majority of members voted to proceed to raise the $300 per month pay to the Government Code allowed $735.

Town Manager Dan Holler said he and the staff have had questions about the Council pay from some who would run for office. He said the salary was set in 1985 and never raised. He added that Councilmembers do receive health insurance. On average, Holler said, about $17,000 per year. He made it clear that under State law for a city of Mammoth’s size, the pay can go up 5% per year. That would allow the Council to raise the monthly pay to $735, which is 5% for 29 years. The other options called for a ballot measure or switching to a Charter City. Town Attorney Andy Morris called the charter option  “swatting a fly with a battleship.”

John Eastman made it clear he would not support a pay raise. Matthew Lehman said he was “very supportive.” He said, “This is not to make money but prevent a Town Council member from losing money. There are a lot of people,” said Lehman, “of certain demographics who want their voice heard. They are discouraged if they spend so much time that they lose money.” Councilman Lehman said this would encourage younger people, and a different spectrum of people, to run for office.

Michael Raimondo agreed. Jo Bacon said it’s like a job running a corporation at very little salary. Said Bacon, “I agree totally with Matthew Lehman.” Mayor Rick Wood said the pay raise would amount to a $30,000 budget increase. Said Wood, “I don’t want to do this until we have a budget discussion. Jo Bacon pointed out that if the Council waited until budget time, a vote on a pay raise would not take effect until June of 2016. If they voted immediately, the pay increase would become effective after this June’s election.

Eastman said it sends the wrong message to the Town Staff and to the community. Said Eastman, “We have a tremendous population of workers for whom things are not going well.” He named three years of below normal precipitation and the recession. Said Rick Wood, “We don’t run for Town Council for the money.”

Matthew Lehman said he agreed but held his ground on “another demographic that can’t afford to hold office.” Lehman made a motion to move forward with a pay raise to $735 per month that would be “effective as soon as legally possible.” Jo Bacon offered a second. The motion passed on a 3 to 2 vote with Eastman and Wood voting no.

to john startz, I understand your perspective and we’re both entitled to our opinions. Just wondering though why I don’t see your name on the ballot either. I have my reasons…I’m a single parent, working two jobs already, trying to raise a family, barely making ends meet to pay rent… Read more »

Once again town council acts on something that the public in general disagrees with but has no say in the matter. Two of the three who voted for the raise are remaining in office so they stand to benefit the most from voting for it. The two no votes are… Read more »

Susan, You are calling two out of three that voted for the increase self serving, really? The deadline has been extend to Wednesday at 5pm, go pull your papers and run for council, its that simple, donate endless hours and take endless punches from people on the chat boards, at… Read more »

BRAVO, John!!! I couldn’t have said it better.

Whatever happened to the time when our elected officials were interested in public service – not money?

Any candidate that will do it for $735 but not for $300 does not deserve anyones vote. It’s not about the money. I respect all the hard work council members contribute. And you’re right, it’s not easy being the one to make the hard decisions. But if they’re doing it… Read more »

Two meetings a month?? I don’t know about the other council members, but I know Lehman spends 30+ hours a week. There are countless other committees, boards etc he sits on, not mention numerous emails, phone calls and walk ins into his office daily that takes him away from his… Read more »

Of course you can’t live on it, it’s not intended to be a living wage. Council positions are public service. Would you vote for someone who would do it for $735 but not for $300? I wouldn’t. I really don’t have a problem with the amount, but when the council… Read more »

My previous message was cut of early??…

To continue: When the council slashes budgets, cut positions and then turns around and gives themselves a big fat raise – it just sends the wrong message and it shows very poor leadership.

Over 2000 dollars a month more all for two meetings a month?

I propose we change the name of this town to Shysterville !

Really ? Let’s see who would do it for Free.

This is a different Really? not me

Fewer cops on the street, heavily in debt, and council more than doubles their own pay – got it.

I know. It’s like when the bank exec’s gave themselves bonuses off the TARP funds. Real forehead slapper….