By News Staff on April 23, 2015 in Government Agencies/Utilities

Bridgeport, CA – On April 21st, 2015 the United States Department of the Interior hosted a multi-agency event announcing that the Bi-State Distinct Population Segment of Greater Sagegrouse will not be listed as threatened. Mono County hailed this action as a step forward in achieving species preservation and ensuring that new regulatory burdens were not imposed on private and public land owners of the Eastern Sierra. 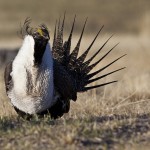 Mono County Board of Supervisors Chair Tim Fesko, representing Mono County at the announcement event, commented, “A listing would have been devastating to Mono County. The proposed critical habitat blanketed 82% of private lands in Mono County, and would have been a regulatory burden that would have deeply damaged our fragile rural economy.

“Today’s action by the Department of the Interior shows that Mono County’s ongoing commitment to resolving this issue through participation paid off for our communities and for the species. Mono County had a choice when the proposed listing was issued: Commit to the conservation effort based on the understanding that the Sage Grouse should not be listed for scientifically verifiable reasons, or fight the listing. Mono County chose conservation and the power of partnerships and collaboration over political grandstanding.”

On Tuesday, this dedicated group of Eastern Sierra leaders and sage grouse advocates traveled to Reno to be a part of the conversation regarding the pivotal decision not to list the Bi-State Greater sage grouse under the Endangered Species Act. Those pictured here include: Mono County Supervisor Tim Fesko, Secretary of the Interior Sally Jewell, and BLM-California State Director Jim Kenna.

Mono County has been involved since the early days of the Local Area Working Group (LAWG) in 2000 and was at the table for the 2004 Bi-State Action Plan, participated in the 2012 update, and
regularly attended the LAWG meetings. Mono County has taken a local government leadership role and helped to:
o Develop a summary report of conservation actions and future agency commitments for the entire Bi-State;
o Support and host outreach and education forums on topics such as pinyon-juniper management and critical habitat;
o Encourage and enhance interagency communication and coordination;
o Work with private landowners to mitigate impacts, follow best practices, and secure resources for conservation work; and
o Count leks with agency biologists to assist with population monitoring.

If the Grouse had been listed, Mono County would have been forced out of a conservation role and into a regulatory role, directing Landowners to obtain clearance/permits from Federal agencies.
Mono County commends the USFWS for its decision to not list the species, and its recognition and support of the tremendous efforts of federal, state and local agencies, conservation entities and local landowners in the collaborative planning and implementation of the Bi-State Action Plan.

Mono County offers a rural setting with the most spectacular landscapes in the state. Situated between the crest of the Sierra Nevada Mountains and the California/Nevada border, Mono County has a land area of 3,030 square miles, or just over 2 million acres, 94% of which is publicly owned. Much of this land is contained in the Inyo and Toiyabe National Forests. As a result, Mono County is home to vast scenic and recreational resources, and has unsurpassed access to wilderness and adventure.

The county is home to, and named after Mono Lake, which is a large high-desert saline lake. Also located in the county is the historic gold rush town of Bodie, which during its heyday in the late 1800’s was home to as many as 7,000 people, and is today maintained as a State Historic Park for the public to come and enjoy. The county seat is proudly located in Bridgeport. Scenic Highway 395 weaves its way north-south through the heart of the county, effectively dividing the steep mountains to the west from the vast desert valley to the east. As it provides access to Yosemite National Park via Lee Vining, it passes beneath towering peaks, and past broad desert expanses.

After years of work to help keep the Eastern Sierra’s Bi-State sage grouse off the list of nationally-protected endangered species, a verdict has been reached. On Tuesday, April 21, U.S. Secretary of the Interior Sally Jewell announced that the U.S. Fish and Wildlife Service (USFWS) has determined that the Bi-State population of Greater sage grouse will not be listed under the Endangered Species Act. 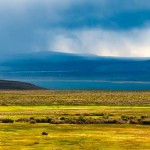 This decision is largely thanks to the efforts of the Bi-State Local Area Working Group (LAWG), a dynamic partnership of ranchers, conservationists, agency and county representatives, and concerned citizens. The Bi-State LAWG created and implemented the Bi-State Action Plan, a long-term, collaborative conservation strategy that lays the groundwork to protect the sage grouse. The plan’s goal is to help sage grouse populations rebound without enacting land use restrictions that an endangered species listing would impose. The, “collaborative, science-based efforts (of the Bi-State LAWG) are proof that we can conserve sagebrush habitat across the West while we encourage sustainable economic development,” Secretary Jewell said in a statement.

The Greater sage grouse is an unusual, ground-nesting bird found in pockets throughout the American West; it depends primarily on sagebrush habitat for food and shelter. The Eastern Sierra’s distinct population is often seen on ranchland where irrigation and sustainable grazing provide an ideal environment for nesting and raising their young. But these working pastures pose serious risks to the sage grouse, and the barbed wire fences that encircle them snare a large number of these birds every year.

With a plan in place that will provide, “the single largest sage grouse restoration commitment in history,” according to the Sage Grouse Initiative, “focus is now shifting to accelerating conservation on the ground.” Organizations such as Eastern Sierra Land Trust (ESLT) have been directing efforts to protect sage grouse habitat: by working to prevent development in high-priority areas, and by “tagging” fences to make them more visible to the birds. With partial funding assistance provided by the Natural Resources Conservation Service (NRCS), ESLT completed a conservation easement last fall at Sinnamon Meadows, a 1,240-acre ranch that contains critical sage grouse habitat. Since protecting the landscape against future development, ESLT and volunteers have tagged fences to make this property safer for sage grouse.

“The teamwork that went into the Bi-State Action Plan provided the proactive restoration of habitat that was needed to prevent the sage grouse from being listed,” commented ESLT Executive Director, Kay Ogden. “These partnerships between members of the ranching community, Mono County, and local and state agencies have provided a foundation on which the long-term protection of this unique species can be built.

“The Bi-State sage grouse is one of those iconic species that represents how unique – and fragile – our Eastern Sierra landscape truly is. ESLT is committed to working hand in hand with landowners to ensure that these unusual birds continue to have a home here long into the future.”

For more information, an online version of the Bi-State Action Plan can be downloaded through the Nevada Department of Wildlife (www.ndow.org).

ESLT works with willing landowners to preserve vital lands in the Eastern Sierra for their scenic, agricultural, natural, recreational, historical, and watershed values. ESLT’s goal is to preserve a healthy balance of land uses that can be sustained forever, ensuring both a strong local economy and environment. To learn more about ESLT’s ongoing efforts to permanently protect the Eastern Sierra’s wild and working lands, please visit www.eslt.org.

We work to provide daily news to all of the Eastern Sierra, in the tradition of Eastern Sierra News Service and the Sierra Wave. We bring you daily happenings, local politics, crime, government dealings and fun stuff. Please contact us.
View all posts by News Staff →
Sobriety checkpoint in Inyo County this Saturday
Owens Valley Committee social event, fundraiser
2 Comments
Newest
Oldest Most Voted
Inline Feedbacks
View all comments

Three cheers for the Sinnamon Ranch! And for all private land owners who provide habitat forthe BiState Sage Grouse. These birds will not survive on public lands because there are guys who cruise around on public dirt roads with .22 semi automatic rifles shooting every thing that flies or runs

Shaking my head
Reply to  wagonrd

You may be the absolute most ignorant person in the I’ve ever seen comment on this site. And that’s saying a lot considering some of the people around here.