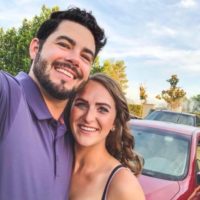 Tucson residents, Alexander Lofgren, 32, and Emily Henkel, 27, were found on a steep ledge in Death Valley National Park on April 8, 2021, after the Inyo County Sheriff’s Office received a report that the couple was missing. Lofgren was pronounced dead, and Henkel was hospitalized after a search and team removed the couple from the ledge on April, 2021. (Photo courtesy of The Office of U.S. Representative Raul Grijalva)

[Editors Note: Sierra Wave has tried to stay on top  of this story, and as with all search and rescue efforts, wish for the best outcomes. Unfortunately, that is not  always the case despite the best efforts of our dedicated rescuers.]

Sadly, one of two missing campers from Tucson who were found on a remote, steep ledge in the Willow Creek area of Death Valley National Park died, officials said Friday afternoon. The Inyo Search and Rescue technical team found the couple 2 miles away from their destination through aerial reconnaissance of the extremely remote area.

The Inyo County sheriff’s office said it began searching for the couple on Tuesday after it received a report that they had not returned from their trip on April 4.

Authorities then found the couple’s missing white 2018 Subaru Forester on Thursday afternoon, April 8, at 11 a.m. with a note that read “two flat tires, headed to Mormon Point, have three days’ worth of water.” The mention in the note of where they were headed was very helpful in the search.

Alexander Lofgren, 32, was pronounced dead and Emily Henkel, 27, was hospitalized after the two were removed from the ledge at about noon on Friday, according to the Inyo County Sheriff’s Office Facebook page.  Henkel was flown to Lemoore Naval Air Station for treatment, and there was no immediate word on her condition.

“To know Alex was to know someone who loved life, loved his family, and loved helping others. Words cannot begin to describe the void this immeasurable loss leaves in the hearts of his colleagues and his family.”

Grijalva went on to say. “Alex lived a life of service and always put the needs of others. The passion he dedicated to his work each day touched countless lives. No matter the situation, Alex met those he helped with a smiling face, a caring heart, and unrivaled empathy,” ending his statement with, “Grijalva said Lofgren will “forever be a part of our family, and my heart is with his family, his loving partner Emily, and his colleagues who mourn him today.”

Lofgren was also a former intern in the Office of Arizona U.S. Sen. Kyrsten Sinema. Sher wrote on Twitter that Lofgren was “an absolutely stellar young man,” adding that, “He had a heart of gold and worked so hard for Arizona and our country. I’m sending so much love to his family and friends. May he rest in power.”

According to U.S.A. Today, Lofgren served four years in the U.S. Army as a combat engineer and deployed to Afghanistan in 2011, according to Grijalva. He also got his bachelor’s degree in political science from Arizona State University. During his fellowship, Lofgren worked as a caseworker with southern Arizona veterans on issues regarding Veterans Affairs health care, benefits and more, according to a 2019 statement.

Henkel worked as a contracted marketing assistant for the Arizona Army National Guard. Additional information was not immediately available, a spokesperson said.

The Inyo County Sheriff’s Office confirmed that Alexander Lofgren is deceased; custody was transferred to the Inyo County Coroner. An investigation will follow to determine the cause and manner of death. Emily Henkel was located alive and flown out for medical treatment by Lemoore Naval Air Station.

The technical search and rescue that took place today followed a lengthy search throughout DVNP that was initiated Tuesday April 6, after Inyo County Sheriff’s Office received notification that Lofgren and Henkel had not returned by their due date of April 4.“This has been a tremendously difficult operation in a very unforgiving geographic area of Inyo County, I sincerely hope for healing and recovery for all involved,” stated Inyo County Sheriff Jeff Hollowell.

Charles Was COD ever released? Have hiked this area many times from the valley floor up – but always considered a hike from the top down to be treacherous. Most resources I’ve read indicate ropes are required as well as a high level of technical skill. Our hearts go out… Read more »

are there any further details on this tragedy – ie, where were they headed, why did they abandon the car, cause of death? thanks.

Thank you for your concern. Many of the details on this tragic incident are in our original article on the missing couple beginning April 8, when the story first broke, as well as in the press releases from the Inyo County Sheriff’s Office. We provided hyperlinks to the latter. Other… Read more »