In October, the Inyo District Attorney filed charges against four people in relation to a fight at Rusty’s Bar in Bishop in May. A scheduled arraignment for last week was continued. 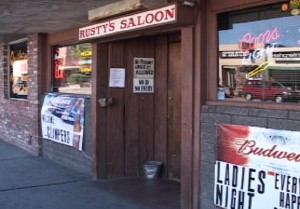 Two Mammoth Police Officers face misdemeanor disturbing the peace charges – former Officer Eric Hugelman and Officer Dan Casabian. The DA had earlier reported that an investigation revealed a verbal fight had escalated into a physical fight just outside the bar.

District Attorney Art Maillet said that the arraignment was continued to turn over a lot of discovery material to attorneys representing the four defendants.

We work to provide daily news to all of the Eastern Sierra, in the tradition of Eastern Sierra News Service and the Sierra Wave. We bring you daily happenings, local politics, crime, government dealings and fun stuff. Please contact us.
View all posts by News Staff →
Wind and Snow Add Up to Road Problems
Bureaucrat Beat: Club Evil, LA, You Owe Us, and Lonely Rats