The dry spell for snow broke loose over the past week and skier visits have edged up even to slightly above last year to date. 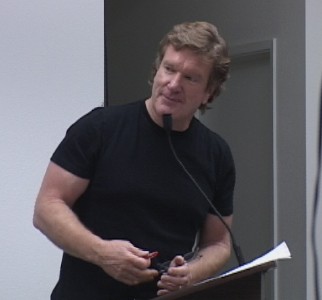 If action continues, Mammoth Mountain CEO Rusty Gregory says skier numbers will jump slightly above last year which added up to almost 1.3 million. Gregory, just back from the east coast, talked about revenue, re-financing the Ski Area debt and his view of the current economy.

Gregory said revenue is up by 10%. “All in all we’re having a very good year.” He said in round numbers, Mammoth expects to bring in about $145 million in gross revenue this year. “We’re on budget for that,” he said.

Gregory said financial markets have improved dramatically in the last year. When Mammoth Mountain sold five years ago, the transaction included debt. “We’re in the middle of refinancing the company at a much lower rate,” said Gregory.

Asked about the economy in general, Gregory said it’s certainly improving but on the street level unemployment continues. “Employers have reduced their costs. Consumer demand has improved. I think we’re on a slow, bumpy road to recovery, not yet felt by the man and woman on the street.”

Retail business has improved dramatically at the Mountain over two years ago. Gregory said retail, hospitality and other discretionary items like ski school and high end rentals dropped but rebounded last year and continue to go up this year.

If money allows, Gregory said the Ski Area would like to “fix the place up. Paint, carpet, lighting – freshen the place up.”

Some people in Mammoth would like the Ski Area to share its revenue with the Town of Mammoth Lakes to help pay its $30 million court judgment. Gregory said the Ski Area is “cheering on for a solution but not waving checks.”

Gregory said he hopes the Town and Hot Creek find a middle ground that they can both afford.

We work to provide daily news to all of the Eastern Sierra, in the tradition of Eastern Sierra News Service and the Sierra Wave. We bring you daily happenings, local politics, crime, government dealings and fun stuff. Please contact us.
View all posts by News Staff →
Bureaucrat Beat: Bodie gold, Edison power, and air time
Judge Lamb comments on Christiana sentence