On Tuesday, Nov 14, Rusty Gregory was awarded the 2nd Annual Bob Roberts Award of Excellence by the California Ski Industry Association in Northstar. This award is presented annually to someone who has made significant contributions to the California ski industry. 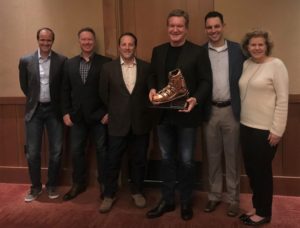 The inaugural award went to John Wagnon who last year retired from his position as Marketing Director for Heavenly Mountain Resort. Rusty was praised for his many contributions to Visit California and increasing travel and tourism within the state.

“It is an honor to present the annual Bob Roberts Award of Excellence to Rusty Gregory. He is an industry icon and a shining example of leadership in the California ski industry” said Michael Reitzell, President, California Ski Industry Association.

The award is named after CSIA’s first president, Bob Roberts, who held the position for 40 years and developed the organization into what it is today, an industry leader in government relations, public policy, and safety.

“I’m proud to count Rusty as a friend and colleague. His time, talent and knowledge have been generously shared with organizations big and small, local and national.  It’s altogether fitting that he should be an honored recipient of the Roberts Boot,” said Bob Roberts, past President, California Ski Industry Association.

Rusty was Chairman and CEO of Mammoth resorts for 20 years and is currently senior strategic advisor, board member and investor in the newly formed company of affiliates of KSL Capital and Aspen Ski Co based in Denver, Colorado.

‘Investor’ says it all. Ski areas are not about recreation any more.

This is like glorifying Donald Trump in my book. Did they include all the people he laid off ?
How about his fight to close June Mountain. Give me a break!